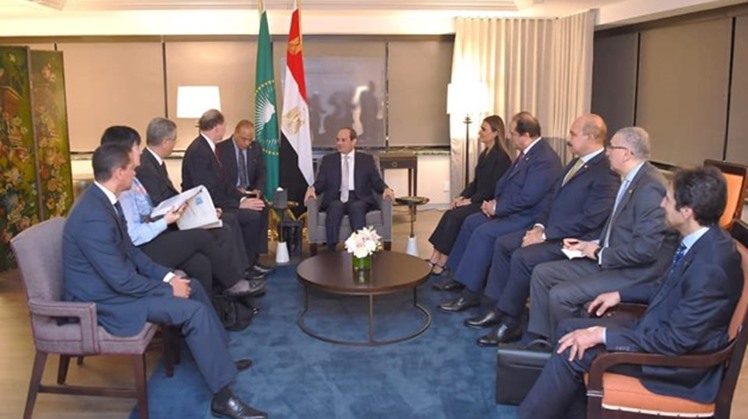 Thu, Sep. 26, 2019
CAIRO - 26 September 2019: On the sidelines of the United Nations General Assembly in New York, Egypt's President Abdel Fattah al-Sisi held a meeting on Wednesday with President of the World Bank (WB) David Malpass, according to the Egyptian presidential spokesman.

During the meeting, Malpass hailed Egypt's success to overcome many of the difficulties it faced during the past years and also hailed the country's success in implementing the economic reform program, which helped improve various economic indicators.

The WB's chief also affirmed the bank's keenness to enhance the growing frameworks of cooperation with Egypt, including many projects in various fields, such as infrastructure, transport, sanitation, energy, education, technical training, health, private sector development, and small, medium and micro enterprises.

For his part, President Sisi said that Egypt has taken major steps toward achieving economic reform, implementing giant developmental projects and empowering women and youth. He affirmed that such accomplishments were achieved thanks to security, economic and political stability endorsed by the Egyptian people.

Sisi also stressed that the state will continue to take the necessary steps to expand the social protection network in order to alleviate the burdens of reform.

Malpass, for his part, affirmed the Bank's supportive stance towards the Egyptian reform and development programs as a model for the region and developing countries.

The meeting also touched on ways to intensify cooperation between Egypt and the World Bank towards achieving development in Africa, in light of Egypt's presidency of the African Union this year, through supporting development finance policies to achieve growth in the continent, supporting all African countries, and coordinating the positions of countries before the financing institutions, as well as establishing joint regional projects that contribute to the development of infrastructure and promote integration between the countries of the continent, and increasing the volume of trade and joint investments.

Sisi has arrived in New York on Saturday morning, and has held meeting with a number of presidents and leaders, including a tripartite meeting with Jordanian King Abdullah II and Iraqi President Barham Salih, where they discussed the Palestinian cause.

The Egyptian president also met with his US counterpart, where President Donald Trump said the relationship with Egypt is “better than ever before” in terms of trade and business. Trump also said he would discuss Libya with Sisi.

Sisi delivered a speech at the Health Care session of UNGA, where he emphasized the highly successful anti-Hepatitis C campaign in Egypt, and also at the Sustainable Development Summit.

Egypt and the World Bank, in May, signed an agreement worth $200 million to support entrepreneurs and small and medium enterprises at the end of the visit of Malpass to Egypt.

The agreement was signed by Country Director for Egypt, Yemen and Djibouti at the World Bank Marina Wes and Minister of Investment and International Cooperation Sahar Nasr at the temple of Philae in Aswan.

The minister stated that the agreement will focus on increasing the volume of credit available to SMEs and enhancing their access to credit. "The Motivating Entrepreneurship for Employment" project aims to remove any obstacles faced by young people and women when starting a business, according to the minster.

Nasr added that the project will finance training opportunities for new companies across the project's life cycle to build the necessary skills and capabilities.

This project aims to increase the founding capital, capital in the early stage and risk capital available to innovative startups facing higher risks and new SMEs with significant potential for growth and job creation. It will invest $50 million in private-managed venture capital funds such as investment funds, venture capital funds, and investment companies to build the early stages of the investment system in Egypt.