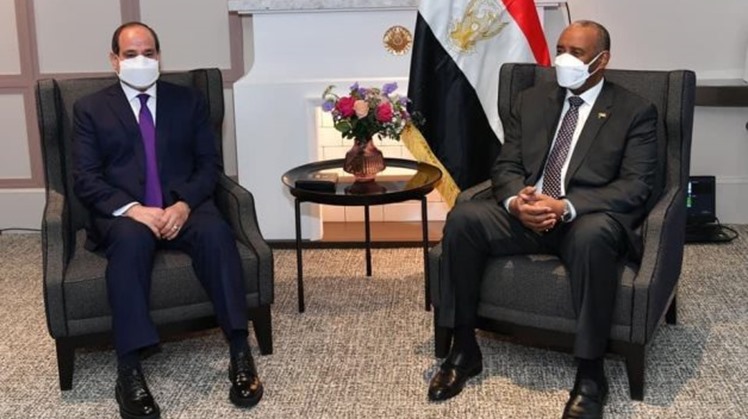 Mon, May. 17, 2021
CAIRO – 17 May 2021: Egypt's President Abdel Fatah al-Sisi held a meeting on Sunday Chairman of the Sudanese Sovereign Council Abdel Fatah al-Burhan in Paris, where they will both attend two conferences on Sudan and Africa.

The president lauded the eternal Egyptian-Sudanese ties and its growth in the past period expressing desire to bolster cooperation on the security, military, economic, and trade levels.

President Sisi stated that Egypt is backing Sudan economically by taking part in the international initiative to settle the country's debts using its share at the International Monetary Fund (IMF).


Egypt has been encouraged to make that step after Sudan embarked on reforms pertinent to its economic structure. In that context, the president expressed readiness to transfer Egypt's experience on economic reforms and provide training for Sudanese human resources.

Both sides displayed what has been achieved within the bilateral relations, including joint military exercises like Nile Eagles 2 carried out in Marwa Airbase in April.

They also conferred over the latest regional developments like Ethiopian attempts to violate Sudanese borders, and the Grand Ethiopian Renaissance Dam (GERD) crisis. Both parties agreed on continuing consultations over the former issue, and on cultivating consensus over the second with the aim of reaching a legal binding agreement that preserves Egypt and Sudan's water shares and achieves development to Ethiopia.

Constructions in the Grand Renaissance Dam started on April 2, 2011 at a cost of $4.8 billion. It was built by the Italian construction and engineering company Salini Impergilo. The capacity of the dam's reservoir is 74 billion cubic meters, aimed to generate 6,000 megawatts by installing 16 turbines.

The latest round of talks that took place early in April failed to harness congruence on a negotiation mechanism. Similarly, Ethiopia had been rejecting enlarging the role of technical experts in negotiations per a proposal by Sudan earlier this year.

US new administration could save GERD negotiations if they decided to to mediate again: Amb. Sat, May. 1, 2021

Austria offers to be part of negotiations between Egypt, Sudan, Ethiopia on GERD issue Mon, Apr. 19, 2021