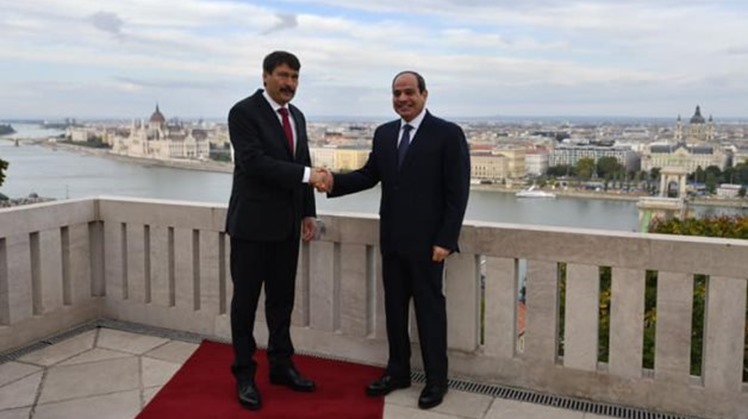 During a meeting with Hungarian President János Áder in Budapest, Sisi stressed that Hungarian companies have great potentials to invest in Egypt and make use of the modern infrastructure in the country to increase their investments in Africa, Presidential Spokesman Bassam Rady said.

The Egyptian people welcome Hungarian investments and are keen to see the European country increase its business in Egypt, Sisi said.

Áder, for his part, praised the great development projects being established in Egypt in various fields.

Hungary is keen to support Egypt in its development efforts through exchanging expertise and joint investments, he said

Egypt’s President Abdel Fattah el Sisi said, Tuesday that Egypt is only seeking to get its share of the Nile waters without affecting others in any way, reffering to the The Grand Ethiopian Renaissance Dam (GERD) issue with Ethiopia and Sudan.

In a press conference with Hungarian President János Áder, in the Hungarian Capital Budapest, he noted that Egypt implemented huge water projects at the cost of $80 billion.

“Therefore, we implemented huge programs to treat wastewater and desalinate sea water, at a cost of $80 billion” Sisi said.

He added that Egypt is considered one of the countries that have severe water scarcity, ‘as we have no other resources than the Nile River’.

Sisi noted that Egypt is approaching the stage of the water poverty line with less than 500 cubic meters of water per capita/year.

“We do not want water to be a cause of conflict, but rather a reason for cooperation among all of us” Sisi said during the conference, adding that “Egypt’s whole civilization was built around the Nile; otherwise, 95% of Egypt’s lands are dry”.

Sisi reaffirmed that Egypt seeks reaching a just and legally binding agreement on the filling and operation of the GERD.

During participating in the Visegrad Summit, Tuesday, in the Hungarian capital Budapest, Sisi stressed that Egypt is looking forward to more cooperation with the countries of Visegrad to exchange expertise and technology, localize industry, and cooperate in the fields of education and training.