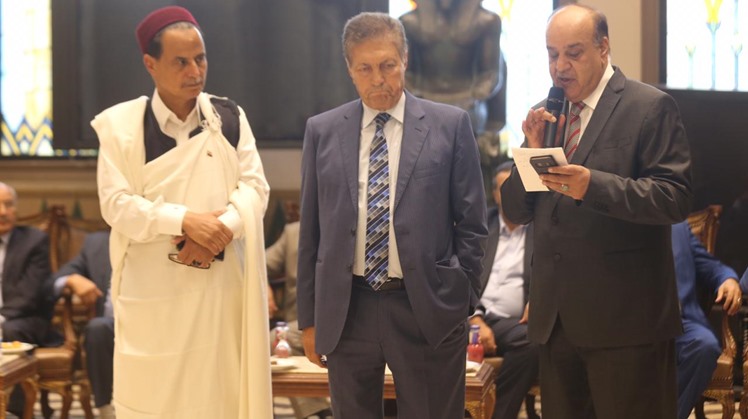 Mon, Jul. 15, 2019
CAIRO - 15 July 2019: Cairo have witnessed a discussion of more than 80 Libyan lawmakers on Saturday to reach a solution to deter foreign interference in the Libyan affairs.

The meetings, led by the Egyptian National Committee on Libya, is part of a series of talks hosted in Cairo to bring together different Libyan parties for the sake of achieving stability and security in the war-torn state. The committee invited around 80 Libyan lawmakers representing the west, south and east parts of the North African state.

Set to conclude Monday, the committee's discussions aim to unify Libyan powers, and consolidate the Libyan Parliament’s role in restructuring the oil-rich country. A final statement will be released by the committee by the end of the meetings on Monday.

“Libyan parliamentarians are coming to Cairo to listen to the advice of their Egyptian peers, who have experience in parliamentary work and democracy, as Libya is still at the beginning of its democratic path. I am optimistic about the discussions held in Cairo,” Libyan Member of Parliament Ali el-Saeedy told Egypt Today on the sidelines of Saturday's meeting.

Speaking about the situation in south Libya, Saeedy described the living conditions as “deteriorating”, blaming the militias controlling parts of the south for what he explained as “the failure of the Libyan Presidency Council to improve services in Libya amid the control of the Muslim Brotherhood and Libyan militias that seize the Libyans’ wealth.”

Member of the Defense and National Security Committee at the Libyan Parliament, Tareq el-Goroushy, underscored the importance of the current meetings in Cairo “to discuss the role of the Libyan Parliament in building a modern state, and to combat foreign interference in Libyan affairs.”

Eissa el-Erieby, head of the Energy Committee at the Libyan Parliament, said that Egypt is a prominent country in the region, and plays a vital and leading role, expecting major contributions from the Egyptian side in the Libyan crisis, especially after the Egyptian chairmanship of the African Union.

During Sunday’s morning session at the Egyptian Parliament, Spokesperson Ali Abdel Aal reiterated Egypt’s supportive stance to the Libyan issue, saying “we will never allow Libya’s security to be tampered with.”

The Egyptian Parliament speaker added that some countries in the region have agendas regarding Libya, saying that “they must wake up and drop their ambitions because Egypt will not allow any infringement on Libya's security.”

On Thursday, at least three car explosions went off in Benghazi’s Al-Hawari cemetery, killing at least four soldiers of the east-based army and injuring 32 others.

Libya has been inundated with civil war since the 2011 uprising that overthrew former Libyan longtime ruler Moammer el-Ghaddafi. The country has been at the center of the world’s attention for its importance as a major conduit for African migrants and refugees fleeing to Europe.

There have been several international and regional attempts to achieve stability and peace in the country that has witnessed prolonged conflict among rivals controlling different parts of it.

Based in Tobruk is the Libyan National Army (LNA) led by Field Marshal Khalifa Haftar, which controls the east and much of the south of Libya, and is spearheading a campaign towards Tripoli.

In 2015, a UN-brokered agreement has installed the Government of National Accord (GNA) led by Fayez el-Sarraj in Tripoli. Although the UN has been working hard for several years to reinforce the GNA’s legitimacy, it could not achieve national consensus, with the Libyan House of Representatives considering it with no mandate, arguing that the Libyan court did not grant the GNA any legitimacy, as per the Libyan constitution.

The Libyan House of Representatives is considered the sole legislative authority in the country, with Aguila Saleh as its spokesperson, rendering Libyan lawmakers’ participation in the reconciliation talks in Cairo important to unify Libyan powers.