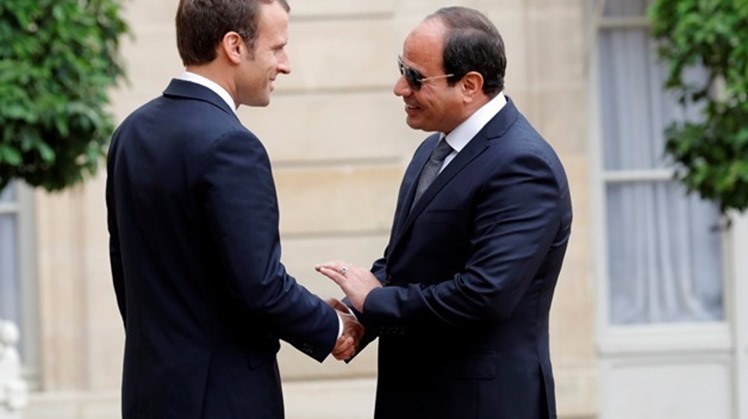 Sisi conveyed his best wishes to the French people on the new year holidays, reassuring French tourists that Red Sea resorts such as Sharm el-Sheikh and Hurghada have almost zero cases of Covid-19. He featured the anti-coronavirus efforts in Egypt, mentioning that the coronavirus cases in Egypt in general are quite moderate.

The Egyptian president said mutual political will exists to further the ties between the two Mediterranean countries, with talks that were “candid and transparent.” He said they both agreed on more French investments in Egypt as huge projects in the country offer attractive opportunities.

Sisi said they agreed on efforts to have talks resumed between Palestinians and the Israeli leading to an independent Palestinian state and peaceful efforts to reclaim Libyan integrity and to remove all foreign forces from the North African country.

In an answer to a journalist question, Sisi said Egypt would never abandon Lebanon or any other Arab country as standing behind every Arab country is an inherent Egyptian policy.

Lebanon was in the heart of talks with France to reclaim their stability and form a new government, Sisi said, calling on all political parties in Lebanon to give a chance for a government to resolve what you are suffering and "we are with you."

Meanwhile, Macron said counterterrorism is at the heart of France's cooperation with Egypt, as well as economic ties, and several relevant agreements will be signed in the visit, Macron said.

France seeks a Mediterranean policy that highlights political stability and energy cooperation without any hegemony, the French president added.

The two leaders also agreed that foreign powers, such as Russian, Turkish, and mercenaries should leave Libya to allow political talks to be resumed and prevent the disintegration of the country. Macron also underscored the importance of resuming oil production.

Macron said political progress in Libya has been hampered by regional powers that decided that Libya should be a theater for its dominance instead of focusing on the stability of Libyans; hence Egypt’s fundamental role in the area, adding that he hopes the situation in Libya will move forward with the help of European allies under the umbrella of the United Nations.

In regards to the eastern Mediterranean, Macron said he and Sisi do not accept undermining countries in the region.

Human rights and the presentation of the Egyptian leadership

Sisi stated that he and Macron spoke of human rights and Islamophobia in light of conditions in the Middle East and what Europe is experiencing, and that Egypt seeks to apply human rights on all citizens equally and prepares a stature regulating NGO work.

For his part, Macron praised the recent release of three human rights activists in Egypt.

The first journalist question posed at the press conference was that if Macron would set conditions pertaining to human rights in Egypt before signing any arm deals, to which Macron said that conditions would not move things forward and would merely cut any dialogue, undermining an important ally in the war on terror.

Sisi, on the other hand, said there are 55,000 licensed NGOs in Egypt and they are vital in the work of the government, wondering how many of them complained about inability to work.

“We are presented as if we don’t respect the people or as if we hate our societies. Or as if we are violent, ruthless, tyrannical leaders, and this is not OK. Not that you speak about it, but that you present us in that way,” Sisi said.

“It is not OK to present the Egyptian state, with all that it does for the Egyptian people and the stability of the region, as a tyranny. This is long gone… There are more than 65 million youths in Egypt who cannot be shackled and on whom you cannot impose a regime,” the president added.

He continued that the government is required to fight an extremist group that has existed in Egypt for 90 years and has established grassroots in the entire world during those decades.

He said he is required to protect the 100 million Egyptians from such groups, saying those asking questions such as these should think of what is happening in Libya, Iraq, Yemen, Lebanon, Syria, Afghanistan, and Pakistan.

“We have nothing to be afraid of and nothing that embarrasses us. We are a nation that fights to build a future for its people amid exceptionally cruel circumstances in a very turbulent region,” he concluded.

Macron also said an open society with an active civil society also protects from terrorism and that he has a list of names of activists he would like to see released.

Freedom of speech vs human rights

Another heated topic raised at the press conference was the caricatures ridiculing Islam. Sisi said terrorism should not be tied to any religion, and religious figures should be respected.

He stressed that there should be a differentiation between Islam and the practices of a small minority of Muslims, noting that Egypt, a Muslim-majority country, was most affected by terrorism not just in the midst of security personnel but also civilians.

An Egyptian journalist, who was last given an opportunity to ask a question, said protecting figures holy to Muslims is a violation of human rights that France did not apologize for.

But Macron said the question is about the view of a religion and not human rights, reiterating that the caricatures are not a message from France to Muslims, but rather it expresses the journalist, and that expression is guaranteed by the law.

He acknowledged that it is a provocation from the author and that it is shocking for Muslims, but others respond to the author in a peaceful way, but when the response is violent it is not acceptable and is in no way equal to the shock the caricatures cause in the first place.

Sis made sure he clarifies the Egyptian position in the sense that it is firmly against any act of violence and that it is not justified in any event, recalling Al-Azhar’s similar stance on the matter.

The Egyptian president said a human is free to embrace any religion and reject whatever, but it is important that while people express their views, they do not give human values priority over religious values because humans made their values and they can be evolved or guided. Religious values, however, were made by the divine, if we admitted this to be true.

“If expressing your opinion hurts the feelings of hundreds of millions and you still believe this expression cannot be rationalized or reviewed… We don’t talk about all freedom or all forms of expression, but only this point in particular.”

“I believe that with the exalted values in France and the developed world that reject jeopardizing the rights and feelings of others, to hurt the feelings of hundreds of millions to the core of their religion and beliefs, I think this can calmly be reckoned with,” Sisi said.

Macron commented after Sisi’s response to the Egyptian journalist, referring to the French history and the philosophy of the “Lumières,” or the age of enlightenment, the revolution, and the United Nations resolutions on human rights. Wagging his index finger, the French president said nothing is above a human and the respect of his dignity.

“There is the respect we have for each other, but in politics, religion does not interfere, not any religion,” Macron said, stressing that there are caricatures that also attack Catholics and Judaism and that any peaceful response to such criticism is fully guaranteed, supposedly leaving no room for violence.

“A free, sane human is above all. And this sane human can believe or not and choose his religion… In our country, if we considered that religion is above humans or politics then we no longer rule our country on democratic bases, but rather we turn into a religious regime and this is not what we choose. It once happened, but it wasn’t the best thing,” Macron said.