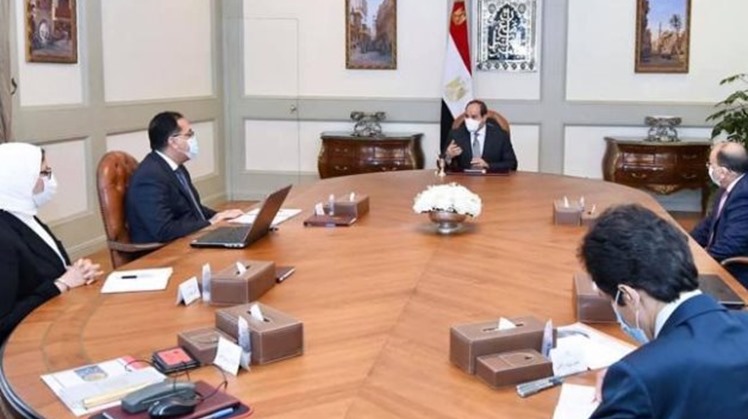 Sun, Mar. 7, 2021
CAIRO – 7 March 2021: Egypt's President Abdel Fatah al-Sisi directed on Sunday to increae the number of vehicles and ambulances used in medical caravans and mobile units operated by the Ministry of Health and Population in rural villages, the presidency spokesperson indicated in a statement.


That was in a meeting the president held with the prime minister, and the ministers of health, local development, and housing as well as the chairman of the Armed Forces Engineering Authority to follow up on the implementation on "Decent Life" initiative.


Ministry of Planning and Economic Development announced in a February statement that the presidential initiative "Decent Life" was included in the Global Partnership for Sustainable Development (GPSDD​).


Minister of Planning and Economic Development Hala el Saeed said that the ministry submitted a request to incorporate the initiative into the GPSDD, noting that the move is in recognition of Egypt's pioneering role in realizing sustainable development goals in rural communities.


She added that several goals of the initiative match the UN's 17 Sustainable Development Goals, which focus mainly on alleviating poverty, eradicating hunger, providing good health and education, as well as drinking water and sanitation services.


The planning minister praised the initiative as an unprecedented development project that aims to develop 4,500 Egyptian villages in three years, with total investments exceeding LE 500 billion.


On 25 February, the United Nations has praised Egypt’s “Decent Life” initiative has contributed to mitigating the negative impacts of the Covid-19 pandemic through improving the standards of living conditions of the most needy groups.


In a report, the UN said the initative has also provided job opportunities through supporting small and medium sized enterprises (SMEs).


It added the goals of the initiative are to be achieved through providing decent housing, water and sanitation for deprived families, and medical and educational services, establishing micro-projects for those most in need and providing in-kind support periodically to most in need families.


Decent Life initiative is an initiative endorsed by President Abdel Fattah el Sisi, with the main objective of improving the quality of life in the poorest rural communities within the framework of the Sustainable Development Strategy: Egypt Vision 2030, through decreasing multidimensional poverty and unemployment rates.


The initiative provides poorest villages with increased access to the basic services such as health, education, water and sanitation, it said.


The first phase was launched in January 2019, targeting to cover 375 villages across Egypt, the UN said.


By launching the second phase, in January 2021, the number of targeted villages increased to 1500, with the number of beneficiaries representing 20% of the overall Egyptian population, it added.

-
The initiative comes as an affirmation of the state's willingness to implement the participatory planning approach through integrating citizens in the need’s identification stage, along with the government and civil society's participation in the implementation and monitoring process