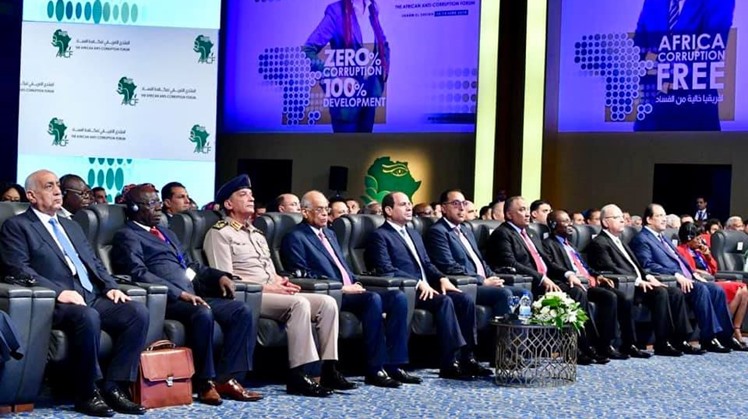 During the inaugural session of the African Anti-Corruption Forum (AACF), Sisi affirmed that “corruption is one of the major obstacles to economic growth and achieving sustainable development in the continent.

On Egypt’s efforts in this regard, the president announced "doubling the training grants provided by the National Anti-Corruption Academy for the cadres of African law enforcement bodies."

"Egypt also welcomes cooperation with its African brothers and the African Union relevant bodies to exchange the best practices in this field. In this context, we also affirm the importance of deepening international cooperation with the main partners of Africa at various levels, to achieve the desired benefit in this regard."

Concerning the national anti-corruption efforts, Sisi said that "Egypt has come a long way in the past years in the fight against corruption in various forms, and has been concerned with conducting research, studies and opinion polls in order to track the causes of corruption and identify real measurements for it."

Sisi noted that, within the framework of the Egyptian constitution, Egypt has been committed to the principle of fighting corruption. This has obliged "the relevant regulatory bodies and authorities to commit to coordinate to fight corruption, and enhance the values of integrity and transparency, to ensure the preservation of public money, achieve good management of it, and organize benefiting from it for the interest of the people in the first place."

"Moreover, requires legislations have been enacted and activated to combat corruption in all its forms, as it is considered one of the main obstacles to achieving sustainable development," the president said, noting, also, to the establishment of the National Coordinating Committee to Combat Corruption and the National Anti-Corruption Academy.

The president affirmed that Egypt is committed to international standards in this regard, adding that It has joined the relevant UN, African and Arab conventions, most recently the African Union Convention on Preventing and Combating Corruption, which is considered the main legal document for the African continent to fight corruption.

"The State (Egypt) has adopted legislative reform measures that govern and comply with all provisions of the Convention, Sisi said.

"In addition, specialized departments have been created to combat financial and administrative corruption, and take digital transformation measures to enhance administrative and financial governance and help eliminate bureaucracy," the president added.

The African Anti-Corruption Forum (AACF) brings together participants from 51 African countries and four Arab countries. The forum is held in line with an initiative that was launched by president Sisi in January 2018 during his participation in the annual African Summit which was held in Addis Ababa under the theme 'Winning the Fight Against Corruption: A Sustainable Path to Africa's Transformation.'

The two-day forum aims at providing a platform for African countries to meet on a regular basis to exchange information, experiences and best practices for the purpose of consolidating their national capabilities and institutions in the fight against corruption.
The forum will address several topics, including the continental and national efforts conducted by African countries in accordance with their international and regional commitments, the relationship between corruption and development, capacity building and human resources, the role of civil society and the private sector, and how to enhance African inter-governmental coordination in combating corruption.

The battle against corruption is vital to the success of Egypt’s Vision 2030 for sustainable development as corruption stifles growth and development. Thus, the country has adopted strict measures among its official institutions to crack down corruption related violations as well as impunity and lack of respect for the rule of law. High rates of corruption can lead to socioeconomic inequality, legal inequality, rule-of-law problems, insufficient economic development, difficulties with attracting foreign investment and tourism, as well as an increase in human rights violations. It affects the functioning of all state institutions.

In 2014, Egypt launched its first four-year national anti-corruption strategy developed by the National Coordinating Committee for Combating Corruption, and implemented by a technical committee headed by the Administrative Control Authority (ACA). The strategy set specific objectives, policies, programs and mechanisms to control corruption and create a culture that counteracts it. The anti-corruption strategy’s objectives include improving the government’s performance, updating the anti-corruption legislation, strengthening the judicial procedures to achieve prompt justice, strengthening civil society engagement in combating corruption, raising living standards and achieving social justice to building trust between citizens and state institutions. Implementing bodies of the strategy include the National Commission for the Coordination of Humanitarian Affairs and the Anti-Corruption Branch, the Parliament, local councils of governorates, ministries and government agencies, as well as various supervisory bodies, councils, universities, research institutes, media and civil society.

In addition, the Egyptian legal framework strongly prevents and combats corruption through:

The criminal code which criminalizes active and passive abuse of power including facilitating payments and bribes in private and public institutions.

The regulatory framework which obligates public officials to declare their assets, upon taking their position, at the end of their term and every 2-5 years during their mandate. This framework applies to all public officials excluding judges, who are required to declare loans, bank deposits, real estate assets and valuable movables only.

The “Anti-Money Laundering Law” which prohibits laundering funds generated from crimes related to drugs, terrorism and exploitation.The “Conflict of Interest Law” regulating what activities and assets senior public officials may and may not enjoy in line with the 2014 Code of Conduct of Public Employees which contains integrity provisions.

To know more about active anti-corruption institutions in Egypt, follow this link,