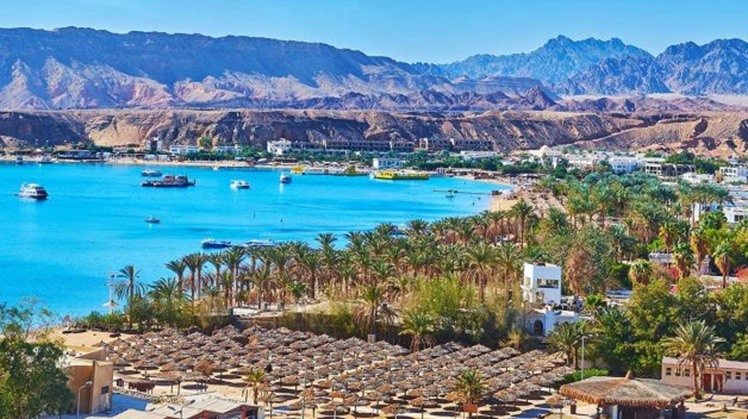 Tue, Sep. 13, 2022
CAIRO – 13 September 2022: Egypt’s officials have been making all efforts to prepare Sharm el-Sheikh city to host the 27th session of the Conference of the Parties (COP27) next November.

Prime Minister, Mostafa Madbouly, inspected and reviewed all the preparations during his last visit to Sharm El-Sheikh, along with the hotels, which are preparing for this major event.

The Prime Minister also inspected the preparations for the headquarters of COP27confrance at the International Conference Center in Sharm El Sheikh.

During his two-day visit to Sharm el-Sheikh, Prime Minister Madbouly said the projects being carried out in Sharm El Sheikh within Egypt's preparations for hosting the UN Climate Change Conference 2022, COP27, provide an ideal opportunity for increasing the number of tourist arrivals in the city during the next phase.

Madbouly's remarks came during his meeting on Sunday with a group of investors in Sharm El Sheikh to discuss the projects aimed at enhancing the efficiency of hotels ahead of the COP27.

The premier also stressed his keenness to hold periodic meetings with the investors working in tourism to listen to their perceptions about how to revive this vital industry.

Madbouly explained that the government submitted a number of proposals to lure more tourists from all over the world in the coming period, citing the existing cooperation between the Ministries of Tourism and Civil Aviation to operate low-cost flights.

Prime Minister Mostafa Madbouli said that the COP27 conference will reflect how the world deals with the issue of climate change through the application of green and sustainable development ideas.

The premier said that work is in full swing at the Sharm El Sheikh International Convention Center to accommodate the large number of participants in the COP27 conference upon directives of President Sisi.

He added that two areas were allocated for the UN Secretariat and NGOs taking part in the conference.

The prime minister issued directives to finalize the construction works in no more than a month to start working on logistical and organizational aspects of the conference as of the beginning of October.

He pointed out that a tracing system is currently in place to track 717 new taxis in the city.

Madbouly also was briefed by South Sinai Governor Khaled Fouda on the latest preparations for the COP27 Conference during his visit.

Fouda, meanwhile, extended thanks to the government for their huge efforts in supporting South Sinai governorate during the ongoing preparations for the Conference.

There is tangible cooperation between the private sector and the international organizations in this respect, he affirmed.

As many as 30 environment-related projects were rolled out recently in the city, he further said.

The governor also shed light on the implementation rates of a number of ongoing projects in the various sectors of roads, bridges and squares and the construction of a central park in Sharm El Sheikh.

Fouda also pointed out to the under-construction green projects in the city, saying that Sharm El Sheikh International Hospital is a model for the first green hospital in Egypt.

Regarding the executive position of the project of high-speed internet service, Deputy Minister of Communications and Information Technology for Infrastructure Affairs Raafat Hendy told Madbouli said that the project covers 100 hotels, adding that the internet service has been extended to exterior areas of 93 hotels and efforts are underway to finalize the rest of the project.

Madbouly inspected a number of drinking water and sanitation projects carried out by the National Organization for Potable Water and Sanitary Drainage (NOPWASD) in South Sinai governorate.

Housing Minister Assem El Gazzar posted the prime minister of a project to build eight water tanks with a capacity of 80 cubic meters, at a total cost of LE 230 million to provide drinking water for 40,000 citizens.