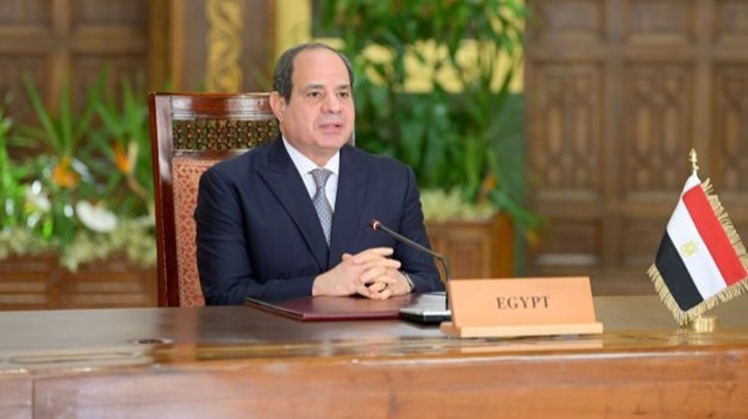 President Abdel Fattah El-Sisi participated in the session through delivering speeches, including to the UN Food Systems Summit, the first ever since announced last year.

During his remarks to the session, Sisi said that Egypt has been keen on manufacturing the COVID-19 vaccine locally, not just to meet the country's needs but also to meet the needs of the whole African continent which suffers the most due to the pandemic.

Sisi added in his speech that Egypt realizes the seriousness of the discrepancy in the paths of economic recovery between countries, according to its ability to provide the necessary numbers of vaccines.

He noted that the developed countries control the largest share of the world’s production of covid-19 vaccines.

All humanity and countries share COVID-19 challenges no matter how different their levels of development and growth” Sisi said. However, he added that ‘the African continent suffers the most due to the spread of COVID-19 and the lack of availability of vaccines.

During his remarks, Sisi called for debt relief, especially for African countries to help its development and growth amid the pandemic.

He explained that Egypt has succeeded in achieving the Sustainable development goals in various governorates and has reduced the developmental disparity between rural and urban areas.

“The economic reform policies that Egypt adopted during the past period was beneficial to the most vulnerable groups of the society,” Sisi said.

Regarding the climate change challenge, Sisi noted that Egypt is well aware of the danger of climate change and is doing its best in this regard ‘before we reach a point from which it is difficult to reverse’.

“Egypt is looking forward to hosting the 27th session of the UN Climate Change Conference of the Parties (COP 27)” Sisi said.

He added that during the past period, ‘we have witnessed many unprecedented phenomena as a result of climate change, which have caused burdens on governments, such as forest fires’.

Egypt’s president also shed light on Terrorism that is facing the world saying that ‘Terrorism remains one of the most pressing challenges that face humanity, and violates the basic rights of citizens.

He also stressed that the Egyptian government is keen on respecting and protecting human rights. “As we realize that the citizen is the heart and basis of any development plans,” Sisi said.

Sisi said that Egypt is one of the driest countries in the world and that its people are below the water poverty line, which explains our concern about the Ethiopian Renaissance Dam.

Achieving cooperation between the African countries cannot happen as per one party’s demands at the expense of another, Sisi said.

Sisi also called on the international community to take the necessary measures to improve the lives of the Palestinian people, support UNRWA in its role and start the reconstruction process in Gaza Strip.

Sisi warned on Thursday that many countries especially in Africa are facing starvations threats which requires quick and effective solutions to save millions of people’s lives.

He added during his speech at the UN Food Systems Summit that Egypt engaged in several discussions and talks along with other African countries to reach a unified African stance regarding the continent challenges.

“Establishing sustainable food systems that achieve food security for our communities should be a priority for all of us amid current challenges” Sisi said, explaining that the importance of establishing sustainable food systems comes in light of the exacerbation of climate change and the resulting rise in temperatures, water scarcity, deterioration in soil quality and desertification of agricultural lands.

Sisi added that the world should be discussing and presenting ideas and solutions to face the international currant food challenges and mobilize the necessary funding in this regard.

He noted that as part of preparing to the summit, Egypt took several moves on the national and the international levels.

‘Nationally, Egypt launched since December 2020, a dialogue bringing together the various concerned government institutions and representatives of the private and civil sectors, which resulted in consensus for the transition to a healthy and sustainable food system’, Sisi said.

On the international level, Egypt engaged in discussions to formulate a unified African stance that reflects the food security challenges that face the continent.

Sisi stressed that the success of the summit depends on the leaders ability to reach solid results and conclusions.

“The success of the UN Food Systems Summit depends -in my opinion- on our ability to reach real results that contributes to formulating an ambitious and feasible system according to the priorities of countries and without imposing a specific vision’ Sisi said.

Egypt’s Foreign Minister Sameh Shoukry also met with foreign ministers around the world and top diplomats on the sidelines of the UNGA in New York.

He also delivered a speech in the 20th anniversary of the Durban Declaration and Program of Action, during which he urged international efforts in the face of all forms of intolerance, including racial discrimination, racism, and xenophobia.

Shoukry met on Saturday with a delegation from the American Jewish Committee, stressing the depth of strategic relations with the United States.

He reviewed Egypt's vision towards the most prominent issues in the region, and its tireless move to revive the peace track in pursuit of comprehensive peace and in an effort to support the pillars of security and stability in the region.

Shoukry met with his Brazilian counterpart Carlos França on Friday to discuss ways to advance cooperation between the two countries, Spokesman for the Foreign Ministry Ahmed Hafez said.

During their meeting on Friday, the two top diplomats also tackled the joint cooperation in regional and international issues in light of Brazil's occupation of a non-permanent seat of the UN Security Council (UNSC) for the 2022-2023 term, the spokesman added.

During the meeting, they discussed special historic relations between the two countries and exchanged visions on issues of mutual concern.

Shoukry also held a meeting with his Algerian counterpart, Ramtane Lamamra on the sidelines of the UNGA, according to a statement by the Egyptian Foreign Ministry.

Shoukry attended on Friday a roundtable discussion organized by the Council on Foreign Relations (CFR) and met with a group of counterparts in New York.

During the CFR’s discussions, Shoukry discussed Egyptian foreign policy and Egypt's efforts on the international and regional fronts.

On Friday, Shoukry met with Malta’s Minister for Foreign and European Affairs Evarist Bartolo, a statement by the Egyptian Foreign Ministry read.
During the meeting they discussed bilateral issues between Egypt and Malta and discussed issues of mutual concern in the Mediterranean region.

malta
Shoukry also met with Foreign Minister of Portugal Augusto Santos Silva, a statement by the Egyptian Foreign Ministry read.
During the meeting, they discussed boosting cooperation between Egypt and Portugal within the framework of the special relations between the two countries.

port
On Friday, Shoukry also met with Norwegian Foreign Minister Ine Eriksen Soereide, a statement by the Egyptian Foreign Ministry read.
During the meeting, they exchanged visions on the special bilateral relations and cooperation horizons between the two countries.

They also discussed regional and international issues of mutual concern.

At the Egyptian delegation’s headquarters in New York, Shoukry received his Syrian counterpart, Faisal Mekdad, a statement by the Egyptian Foreign Ministry read.
During the meeting, they discussed issues of ending the crisis in Syria.

Shoukry, over the past days, have met with foreign ministers of numerous countries, including of the US and European states.
On Wednesday, Shoukry discussed with US Secretary of State Antony Blinken bilateral relations as well as regional and international issues of mutual concern.

During the meeting, Shoukry and Blinken agreed on the importance to work on the good preparation of the next round of strategic dialogue between Egypt and the US in the near future.

The meeting reflected the importance of coordination and consultation between Egypt and the US during the coming period to continue advancing joint cooperation fields in priority sectors, the statement said.

The meeting also underlined the importance of working to remove any obstacles that may hinder the two countries’ aspiration to push their strong relations toward new horizons.

Shoukry and Blinken discussed the most prominent political, security and economic aspects of bilateral relations within the framework of the strong, historical and complex relations between Egypt and the US.

This comes in a way that achieves the common goals and interests of the two friendly countries and peoples, the ministry added.

The discussions also included “our mutual desire for results-oriented negotiations on the Grand Ethiopian Renaissance Dam under the auspices of the African Union,” Price said.

The ministers also discussed their countries’ keenness to strengthen and deepen their partnership, Price added.