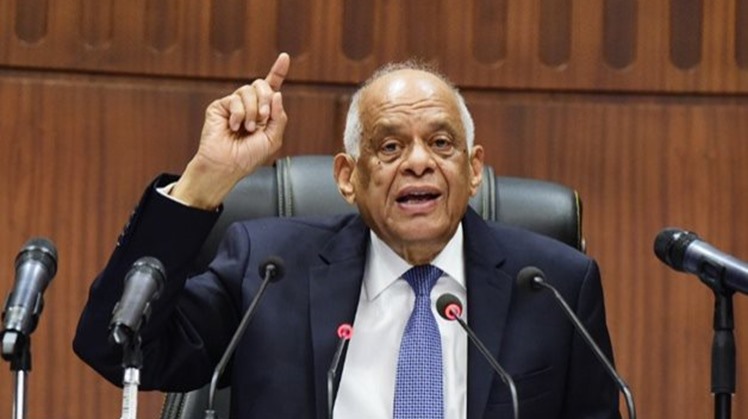 Wed, Nov. 25, 2020
CAIRO - 24 November 2020: Egypt's Speaker of the House of Representatives, Ali Abdel-Aal, invited his Libyan counterpart, Aguila Saleh, to attend a meeting at the headquarters of the Egyptian Parliament, with several Libyan representatives from all parts of Libya to agree on several constants and standards required for a political solution to the current Libyan crisis.

In a letter Abdel-Aal stated “My dear brother, Counselor Aquila Saleh, speaker of the Libyan Parliament, ladies and gentlemen, members of the Libyan House of Representatives, within the framework of the Egyptian Parliament's support for dialogue between Libyan brothers and official institutions to reach a solution to the Libyan crisis without external interference or influence, and to complete the role of the Cairo meetings, we invite you and those who wish, from among the Libyan representatives, to meet in the Egyptian House of Representatives to hold a consultative meeting on November 24, 2020. This aims to reunite the representatives from all parts of Libya to agree on several principles and standards required for the political solution to the Libyan crisis.

Therefore, you may agree with us on the importance of accepting the invitation to come to Cairo and meet under the dome of the Egyptian Parliament to confirm your national positions and live up to the trust that the great Libyan people placed in you to get them out of the current crisis and bring them stability, security, and prosperity," the letter read.

"In conclusion, we affirm that the leadership of Egypt, its government, and its people stand behind the Libyans to overcome their current ordeal and achieve their aspirations for a modern, democratic, civil state. God bless the Libyan people and save them," the letter added.

On January 12, Saleh called on Egypt to militarily intervene to protect his country, take a courageous stance and put an end to the Libyan cisis. Saleh's remarks came during his visit to Egypt, accompanying a senior delegation, to meet with his Egyptian counterpart Abdel-Aal.

Saleh co-chaired the parliament’s plenary session, confirming the support of Egypt for the decisions taken by the Libyan parliament, especially towards the Turkish potential interference in Libya.

In a meeting with the Libyan tribal leaders last July in Cairo, President Abdel Fattah El-Sisi has affirmed Egypt’s longstanding support to a peaceful solution in Libya through encouraging negotiations between Libyan factions, but said Egypt will not stand idly as it watches incidents that threaten Egypt’s national security.

Sisi had announced an initiative calling for ceasefire in June. However, he announced on July 16, during his meeting with the tribal chiefs, that one of the conflicting parties, definitely referring to the GNA, has failed to have the political will to apply ceasefire and stop illegal activities in the country and has fell under the control of a "foreign power," referring to Turkey.

He warned that the Sirte-Jufra red line shall not be crossed, describing it as a call for peace by Egypt to activate the political solution in the country. The Libyan provinces of Sirte and Jufra are both critical for Egypt and the Libyan National Army. They strategically lie in the center of the country. Sirte has most of the country’s oil and is a major point of conflict between the conflicting sides, due to a maritime deal between Turkey and the Government of National Accord, which is rejected by the Libyan National Army, Egypt and Europe. Egypt also fears that it can be attacked by jets launching from the Jufra airport.

Civil war broke out in Libya after the toppling of long-time ruler Muammar Gaddafi in 2011, who was later killed. Numerous militias are fighting for power and influence in the country, with Tripoli-allied militias backed by Turkey, Qatar, and Italy. Meanwhile, eastern-based military commander Khalifa Haftar’s Libyan National Army is backed by the United Arab Emirates, Egypt, France, and Russia.