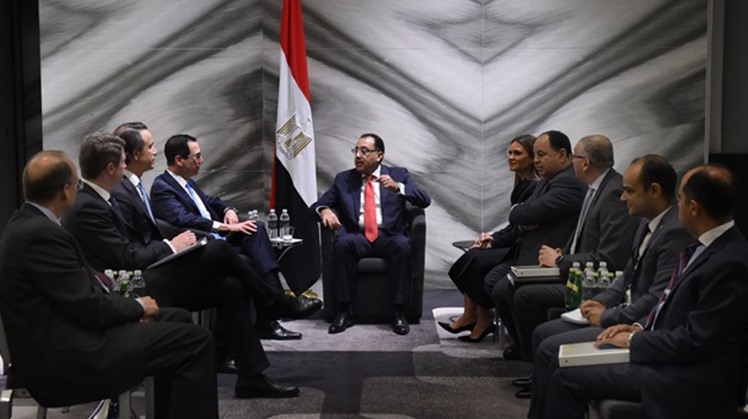 Thu, Oct. 17, 2019
CAIRO - 17 October 2019: US Treasury Secretary Steven Mnuchin held a meeting on Wednesday with Egypt's Prime Minister Mostafa Madbouly in Washington, hailing growing cooperation between the US and Egypt, the Egyptian Cabinet said in a statement.

With regard to bilateral cooperation, Nasr reviewed the outcome of the Madbouly's meeting with the President of the International Finance Corporation, referring to the areas of cooperation that have been agreed upon to be activated in terms of transport, water desalination and the electricity linkage with Africa.

The meeting also touched on the efforts exerted by the US to limit the negative consequences of the Turkish aggression on the Syrian territory and the sanctions announced by the Treasury against Turkey in this regard.

Madbouli reiterated Egypt's strong condemnation of the Turkish assault and demanded the immediate withdrawal of Turkish troops from Syria.

On Tuesday, Madbouli also met with Vice President of the US Mike Pence, where they affirmed the centrality of the Egyptian-US relations, and also discussed the Turkish offensive in Syria that has continued for a week, despite wide condemnation.

Madbouli and Pence also discussed the political updates of the issue of the Grand Ethiopian Renaissance Dam (GERD), according to official statements.

Egypt, under President Abdel Fattah al-Sisi, has been home for social housing projects aiming at providing families living in slums with alternative apartments, and also secure properties for the youth.

Minister of Housing, Utilities and Urban Areas Assem el-Gazar in September handed over 30 social housing units to the youth in the city of 10th of Ramadan, Sharqia governorate, according to a statement from the ministry.

The ministry is building a project of 2,200 housing units in 110 buildings at a cost LE 383 million, the statement added. The minister then inspected the city to be updated on the implementation of the project.

The governor stated that the authority finished the demolition of 249 unlicensed buildings in Eshah Abou El Seoud moving the residents, who are members of 497 families, to Asmarat 3 neighborhood.

In July, the ministry announced that the execution of 1,440 residential units within Sakan Misr initiative, and 1,584 social housing units distributed among 66 buildings in Asyut, Upper Egypt.