strong, profound strategic relations between Egypt and US 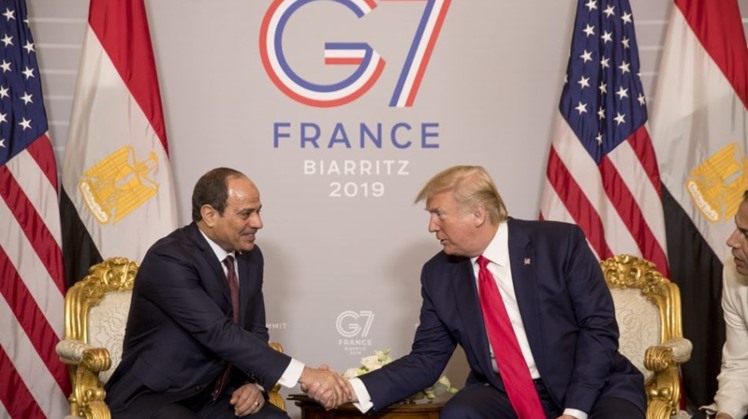 During the meeting, President Sisi asserted the strong and profound strategic relations between the two countries and lauded continued progress during the Trump administration.

Here is a timeline of Sisi’s visits to the United States:

The first visit took place three months after Sisi assumed his position as the president of Egypt. He then participated in the 69th Summit of the United Nations General Assembly in New York City, where he gave an official speech.

In an interview with CNN’s Erin Burnett, Sisi said he had “no doubt” that Republican presidential nominee Trump would make a strong leader. Burnett asked Sisi about Trump’s possible plan to ban Muslims from certain countries from entering the U.S. if elected!

“The United States in general conducts very strict security measures for everyone who wishes to visit it, which has been in place for quite a few years,” Sisi said. “It’s also important to know that during election campaigns many statements are made and many things are said, however afterwards governing the country would be something different. And will be subject to many factors.”

The second visit by President Sisi to the United States came during his participation in the 70th Summit of the United Nations General Assembly.

During the third visit, President Sisi headed to the United States to take part in the 71st Summit of the United Nations General Assembly in New York City. He participated in summits and meetings concerning climate change, peace in Africa and refugees.

This is was the first time President Sisi visits Washington D.C. after he assumed post, where he held an Egyptian-American summit at the White House with his U.S. counterpart Donald Trump.

President Trump welcomed Sisi to the White House for the first time in eight years, pledging close cooperation with the Egyptian leader on counterterrorism operations and praising his leadership of the Middle Eastern nation.

“I just want to let everybody know, in case there was any doubt, that we are very much behind President al-Sissi,” Trump said, sitting next to his counterpart in the Oval Office.

“He’s done a fantastic job in a very difficult situation. We are very much behind Egypt and the people of Egypt. . . . We have strong backing,” he added.

Trump and Sisi appeared focused on security, and they sought to demonstrate warmth, shaking hands during their brief remarks to reporters.

This meeting represented an end to the coldness with which Egypt was treated by former U.S. President Barack Obama, who never invited Sisi to Washington.

“Since we met last September I have had a deep appreciation and admiration of your {Trump’s} unique personality, especially since you are standing so strong against terrorism,” said Sisi.

“Very strongly and openly you will find Egypt beside you,” he added.

Both presidents Sisi and Trump met in New York City on the sidelines of the 72nd Summit of the United Nations General Assembly, where they discussed several regional and international issues, including ways of reviving the peace process between Palestinians and Israelis.

President Sisi expressed Egypt’s aspiration for further coordination and consultation with the U.S. on various issues in the region, particularly that of counterterrorism, “which poses a great threat to the stability of the region and the world.” He also emphasized that putting an end to funding and harboring terrorists is a must.

The U.S. President hailed the distinguished bilateral relations with Egypt, stressing the importance of promoting ways of enhancing them.

This visit has witnessed the fifth summit between both leaders on the sidelines of the 73rd Summit of the United Nations General Assembly. Bilateral discussions tackled the situation in Libya, Syria and Yemen, in addition to the Palestinian cause.

The two leaders met to discuss how the United States and Egypt can work together to address the spread of extremism, terrorism, and violence in the Middle East, as well as build stronger and more resilient economies and societies across the region.

President al-Sisi responded by saying, “Since we met last September, I’ve had a deep appreciation and admiration of your unique personality, especially as you are standing very strong in the counterterrorism field to counter this evil ideology that is claiming innocent lives, that is bringing devastation to communities and nations, and that is terrorizing innocent people.

“You will find in Egypt and myself always beside you in this, in bringing about an effective strategy in the counterterrorism,” said President al-Sisi.

President Trump responded by saying, “We will do that together. We will fight terrorism and other things, and we’re going to be friends for a long, long period of time. We have a great bond with the people of Egypt, and I look forward to working with the President.”