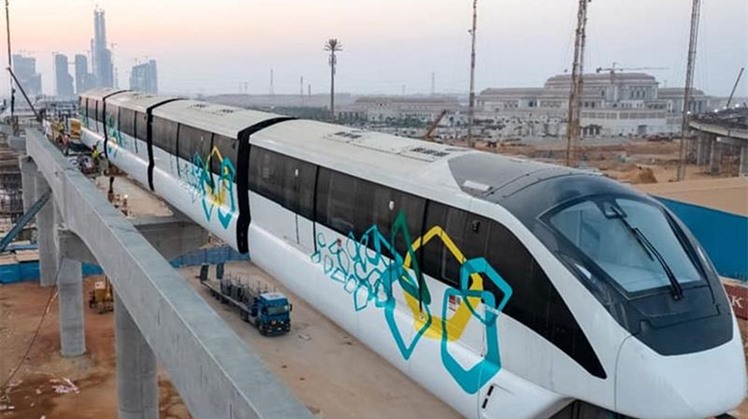 Thu, Oct. 7, 2021
CAIRO, 7 September 2021: Egypt's Ministry of Transport revealed on Wednesday images of the installation of the first monorail on the East Nile monorail track, in the New Administrative Capital.

The ministry explained that the country has received the first two trains of a total 40 trains, set to be installed on the East Nile Monorail project, and the first train of a total 30 trains to be installed in the West Nile Monorail project, while the rest of the fleet units are being manufactured, and will arrive successively per a specified schedule.

The Ministry of Transport said that the total length of the two projects is 98.5 km, with 35 stations, and the capacity of each monorail line is 600,000 passengers per day. which it serves.

The ministry confirmed that the total implementation rate of the East Nile monorail sector amounted to 24.7 percent, and the percentage of civil works was 27.5 percent (including implementation, procurement and design), and the total percentage of electromechanical works was 22 percent, and equipment is currently being manufactured at 11 percent and tests are being conducted successively.

Monorail trains are distinguished by the fact that they are monorail, moving on a concrete beam that operates without a driver, with a design speed of 90 km/h, and a rushing time of 90 seconds. The trip duration using the East Nile Monorail is 60 minutes, and for the West Nile Monorail, it is 45 minutes.

For the first time, screen doors will be installed on the sidewalks in front of the train doors to maintain the safety of passengers, in addition to having safe corridors that allow the transfer of passengers between cars for more comfort, and to facilitate emergency evacuations. The monorails are also equipped with cameras for monitoring the railway.

There are LED screens inside the carriages to provide passengers with information about the trip, or screen paid commercials.

Above the side doors there is a screen to inform passengers of the name of the final station before they board the train, and places for wheelchairs for people with special needs. The carriages were also provided with maps above the passenger doors from the inside, showing the route by means of illuminated lamps to help the hearing impaired.