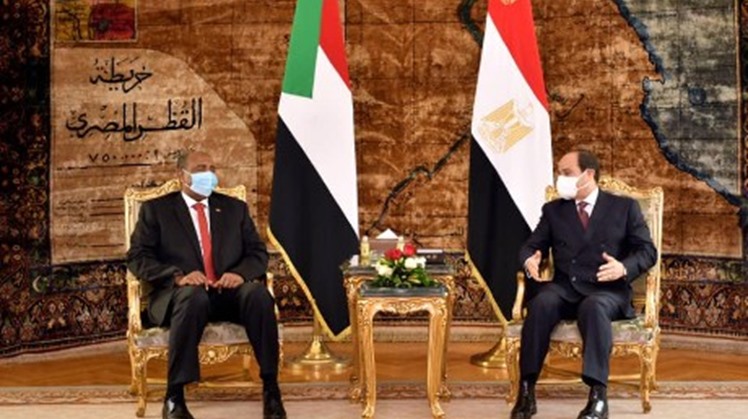 Sisi held a meeting with Al-Burhan who arrived earlier on Tuesday in Cairo for a one-day visit.

"The meeting saw discussions over the GERD, with a consensus reached over the water issue facing both countries, deeming it a national security issue," Presidency Spokesman Bassam Rady said.

El-Sisi affirmed Egypt’s support for the political leadership in Sudan in “shaping their country’s future”, welcoming all efforts aiming to aid Sudan in facing its economic crisis, and towards accomplishing regional stability and peace.

The visit comes hours before the resumption of the much-anticipated trilateral talks between Egypt, Sudan, and Ethiopia proposed by the African Union chairman over the GERD.

The negotiations will resume following a seven-week hiatus due to persistent failure to reach a binding deal on the filling and operation of the dam.

Egypt, which relies heavily on the Nile River as its main water supply, pulled out of talks in late August after the three countries failed to reach a consensus on the legal and technical points of contention, after Ethiopia proposed a package of non-binding guidelines for the filling and operation of the mega-dam.

The resumption of negotiations comes a few days after US President Donald Trump laid the blame squarely on Ethiopia for the failure of the negotiations and said that Cairo's concerns in the dispute are legitimate.

In response, Ethiopia summoned US Ambassador to Addis Ababa Mike Raynor over Trump’s comments, which Ethiopia described as an “incitement of war."

The GERD, built 15 kilometres from the Ethiopian border with Sudan, has been a source of contention between the three countries since its construction began in 2010.

The first filling of the controversial dam took place this summer, despite Ethiopia not having reached a binding agreement with its downstream neighbours.

Cairo fears the massive hydropower project will significantly cut its crucial water supply, while Sudan fears it could endanger the safety of its own dams

Ethiopia’s letter to UNSC is an attempted “to drive a wedge” between Arab League, African Union: AL Wed, Jul. 7, 2021