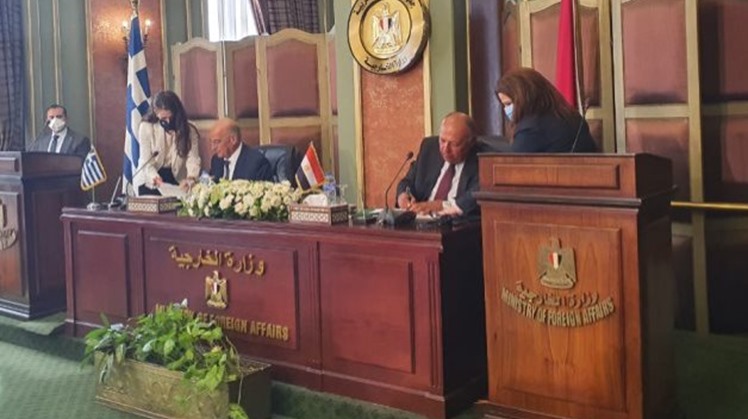 Mon, Aug. 17, 2020
CAIRO - 17 August 2020: The Egyptian Parliament’s constitutional committee on Monday approved a maritime demarcation agreement to establish an exclusive economic zone between Egypt and Greece, after spotting no legal or constitutional violation.

The agreement creates a partial demarcation of maritime borders, according to the explanatory memorandum, as total demarcation will be announced through negotiations in the suitable time.

In a press conference held after the talks, Shoukry said the agreement reflects further boost in relations between Egypt and Greece, as they both work on continuing economic cooperation and coordination in various fields.

For his part, Dendias affirmed continuous coordination with Egypt at the highest levels and said agreements between Egypt and Greece are in line with the international law.

The demarcation agreement signed between Egypt and Greece will contribute to attracting investments for search and exploration, Hamdy Abdel Aziz, official spokesman for the Egyptian Ministry of Petroleum and Mineral Resources, told Egypt Today.

This will help, through signing petroleum agreements, intensify exploration efforts to extract the underlying resources in the Mediterranean Sea, said Abdel Aziz.

During the press conference, Dendias also denounced the agreement signed between Turkish President Recep Tayyip Erdogan and Fayez Al-Sarraj, prime minister of the so-called Government of National Accord in Libya as illegal, reiterating that it violates international law.

Sarraj and Erdogan in November last year signed two MoUs on security cooperation and the "delimitation of maritime jurisdictions,” which Egypt has strongly condemned.

Later in November, Egypt, Cyprus and Greece announced that the two MoUs signed by Turkey and Libya’s UN-backed government, “has no legal effect”.

According to a statement by the Egyptian Foreign Ministry, the foreign ministers of Egypt, Greece and Cyprus agreed that these MoUs “has no legal effect”, as the signing exceeds the powers of Sarraj in accordance with the Skhirat Agreement, which was announced in December 2015.

In another statement by Egypt’s Ministry of Foreign affairs it was stated that Skhirat Agreement, agreed upon by Libyans in December 2015, set the powers of the Government of National Accord.

The eighth article of the agreement prohibited the Libyan prime minister from solely clinching international deals without consent of all the cabinet members. As the current Government of National Accord lacks full representation of all the Libyan regions, the current government is a caretaker cabinet with limited powers, the Foreign Ministry said in its statement. Such deals are not binding or affecting the interests and the rights of any third parties, it added. The deals will have no influence on maritime border mechanism in east Mediterranean area, it said. Egypt urged the international community to shoulder its responsibility towards these negative developments, fearing it would affect Berlin political process that aims at finding a political solution to the Libyan crisis.