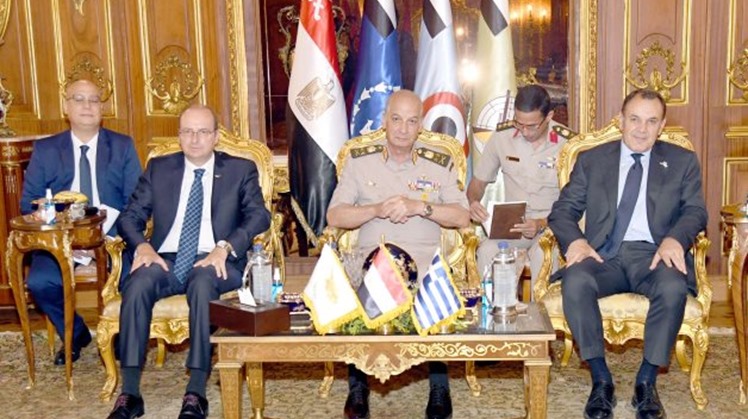 Wed, Jun. 22, 2022
CAIRO – 21 June 2022: The Egyptian, Cypriot and Greek ministers of defense met Monday in Cairo to hold talks on joint military cooperation as well as issues pertaining to the mutual interests of the three states.

Minister Mohamed Zaki, who is the general commander of the Egyptian Armed Forces, also held bilateral meetings with each of his counterparts. In the one with Cyprus' Minister Charalambos Petrides, the two parties discussed the exchange of experience among other topics.

As for the meeting with Greece's Nikos Panagiotopoulos, the talks tackled the regional and international circumstances influencing security and stability in the Middle East, and Eastern the Mediterranean. That is in addition to conferring over strengthening military ties between both countries.

In the trilateral meeting, Minister Zaki commended the growth in cooperation among the three states over the past period, which has contributed to the unification of concepts relevant to the issues impacting their joint interests.

On his side, the Cypriot defense minister underscored the salience of persistent coordination, and joint exercises among the three countries. He equally valued collaboration with the Egyptian Armed Forces, given it is a military power of great strategic significance in the Middle East.

On another level, the Greek minister noted that the trilateral meeting has been very fruitful, as its outcomes would fulfill the reciprocal interests of the three Mediterranean countries. He further expressed appreciation for Egypt's effective role on the regional and international scales as well as achieving stability and security in the Middle East and Eastern the Mediterranean.