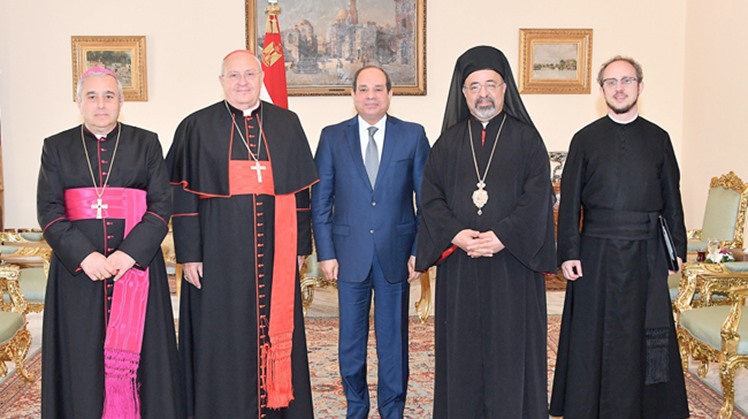 Mon, Mar. 4, 2019
CAIRO – 4 March 2019: Egypt's President Abdel Fatah al-Sisi asserted the country's current approach to establish the values of coexistence and freedom of worship during a meeting with President of the Congregation for the Oriental Churches Cardinal Leonardo Sandri on Sunday.

Sisi referred to the document signed by Azhar Imam Ahmed al-Tayyeb and Vatican Pope Francis on Human Fraternity for World Peace and Living Together in Abu Dhabi a few weeks ago, presidential spokesman Bassam Radi said.

Sisi highlighted the importance of understanding the culture of the region with its standards and principles, within the framework of acceptance and respect.

Sisi also pointed out to the Egyptians' appreciation and respect for Pope Francis of the Vatican, and referred to positive developments in the bilateral relations between Egypt and the Vatican during the past years, especially the historic visit of Pope Francis to Egypt in 2017, and the restoration of dialogue between Al-Azhar and the Vatican.
For his part, Cardinal Sandri affirmed Vatican's keenness to strengthen cooperation with Egypt to support the culture of dialogue, coexistence, peace and interfaith dialogue, according to Radi.

He said that the steps taken by the Egyptian state, such as opening the Cathedral of Nativity alongside Al-Fatah al-Alim mosque in the New Administrative Capital, are a message of love and peace for the whole world, adding that they reflect a political will to consolidate the concepts of citizenship, tolerance and coexistence among all Egyptians.