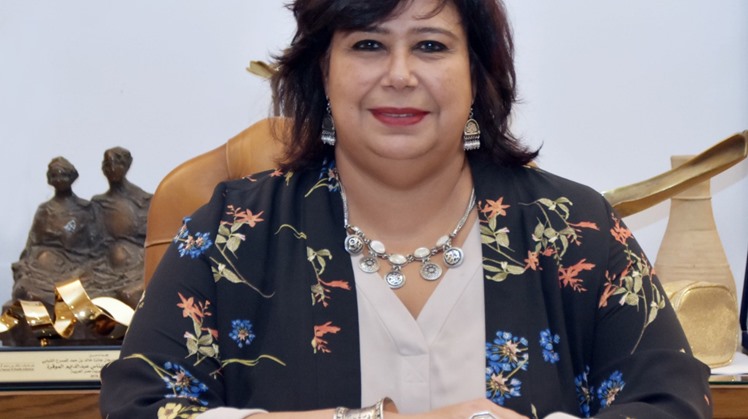 Mon, May. 9, 2022
The American Metropolitan Administration honors Dr. Enas Abdel Dayem, Minister of Culture, and presents her with the live broadcast of the Turandot Opera, which is received by the Egyptian Opera headed by Dr. Magdy Saber at six in the evening, Saturday, May 7, at the Small Theatre, as delivered by Mahmoud Abdullah, a member of the Metropolitan Opera Board of Directors, the Metropolitan Glory Encyclopedia In appreciation of her continuous efforts to enrich creative life in Egypt, the broadcast is preceded by a dialogue with her about her artistic career, conducted by Tarek Attia, Director of the Cultural Liberation Center at the American University.

And Dr. Enas Abdel Dayem had announced the resumption of the live broadcast of the Metropolitan shows this season, as the Egyptian Opera House became the first in Africa and the Middle East to enjoy this privilege in 2022 after the previous season was stopped due to the Corona pandemic.

For his part, Dr. Magdy Saber, President of the Egyptian Opera House, said that the live broadcast of the Metropolitan operas is a huge success, noting that it is scheduled to receive the opera Lucia de Lamarmore by Donizetti and Hamlet by the contemporary Australian musician Brett Dean during the current artistic season, and stressed that the Egyptian opera was a pioneer In the transfer of the Metropolitan performances, where cooperation between them began since 2010, and he added that in order to complement the message of enlightenment came the keenness that one of the great artists such as the late Hassan Kamy and some experts present a summary and analysis of each work before the show to develop a taste for the art of opera, which was the pioneer in the Arab world for Egypt With the establishment of the Khedive Opera House.

It is worth noting that Puccini died before he finished writing his opera Turandot and completed its last stanza by Franco Alfano. It was first shown at the La Scala Theater in Milan on April 25, 1926. It is based on a play of the same name written by Carlo Gozzi in 1762 and adapted in turn from the tales of the Thousand and One Nights, and includes three chapters. Its events in China revolve around Prince Calaf falling in love with Princess Turandot, who pledged to marry him by passing a test that consists in solving three complex challenges and Calaf succeeds in the test, but the princess insists on refusing to marry him and the events follow.

Turandot is directed by Zeffirelli, conducts the orchestra by Maestro Marco Ermilato, and performs the main roles of Ludmila Monasterska as Turandot, Ermonella Jahu as Liu, Younghun Lee as Clave, Ferrioscio Forlantino as Timur.