Egyptologist: The Grand Opening of The Sphinxes Avenue ceremony made Egypt a source of cultural and civilizational radiation to the world 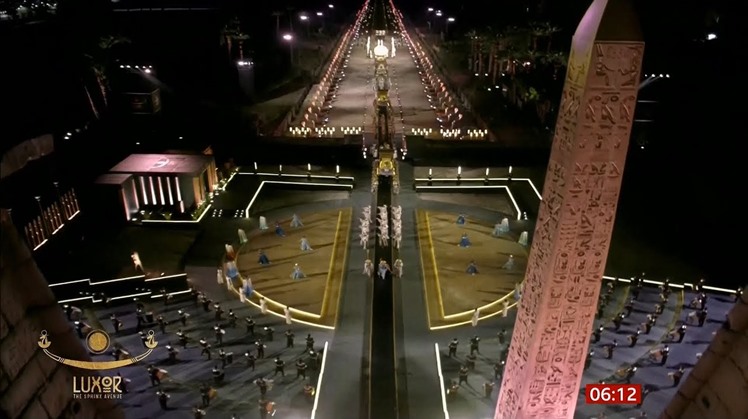 Sun, Nov. 28, 2021
Abdel Rahim Rihan, Director General of Research, Archaeological Studies and Scientific Publication in South Sinai, said that Egypt, which was the dawn of conscience for the ancient world and the source of civilization that taught the world to write through the inscriptions of the Serabit el-Khadem temple in Sinai, and the geometry embodied in the architecture of the pyramid, medicine and pharmacy from Imhotep, ancient Egyptian papyri and arts Sports games, drawings on the walls of tombs, camels, making beauty in the eyes of Nefert, and the features of Nefertari and Nefertiti, are what will lead the convoy of the world to a future of a new civilization in which conscience and justice are blended with progress, which is what we saw in the ceremonial opening of the majestic Sphinxes Avenue.

Dr. Abdel Rahim Rihan added that this dazzling performance in the Luxor celebration of performances, music, singing, lights, and a procession that connects the past with the present, identifies the opera procession and revives an ancient scenario that the world has not seen before. Unprecedented and unexpected achievements in a short period of time followed a period of darkness, chaos, and a brutal war of evil forces and those who supported them internationally and locally, until all roads became blocked and the bottleneck narrowed, and many bet on Egypt’s return to rise again. The impossible surpassed all perceptions and expectations until the world view changed and Egypt's shares rose and gained the appreciation of the whole world.

Dr. Rihan pointed out that there is a media dimension to this event, as Egypt has become the main viewer on the covers of major international magazines and the main news of all international news agencies. Rather, it turned with this procession to the talk of the hour to carry out free advertising for Egypt at the beginning of a tourist season, to assure the world that Egypt is safe and confirm the safety of health procedures In light of what the world is experiencing, and it is expected that Egypt will reach 40 million tourists within three years, as the maximum number that Egypt reached before 2011 was only 12 million, which is not commensurate with what Egypt possesses of various tourist components such as archeology tourism, medical tourism, safari, and the desert and tourism community Environmental, beach, conference, etc.

Dr. Rihan pointed out that this event, along with the procession of the former mummies, with the celebration of the announcement of the Great Transfiguration project in St. Catherine, which coincides with the feast of the martyrdom of St. Catherine on December 8, will draw the world’s attention to the importance of exceptional sites in Egypt registered as a world heritage by UNESCO and enjoying state care and preservation in good use. The integration of local communities with the impact, in addition to what Egypt awaits from major openings that will witness this beauty and creativity in artistic production, such as the Grand Egyptian Museum and the second phase of the Sharm El-Sheikh Museum, and the preparation of all stations of the Holy Family’s path as a pilgrimage route in Egypt and Historic Cairo after its restoration, rehabilitation and employment and the transformation of the tanneries and Ain area Al-Sira to an international park and an open museum for antiquities and arts will lead to maximizing the use of all tourism potentials in Egypt and stimulating tourism in all Egyptian cities

Dr. Rihan added that the dazzling Egypt presented in the procession of mummies and the opening of Sphinxes Avenue will change the world's view of the concept of archeology tourism, which occupies a small percentage for global tourism compared to ecological, beach and medical tourism.

On the cultural level, Dr. Rehan pointed out that Egypt will become a source of cultural and civilizational radiation to the world, which will result in a global appreciation from international, Arab and Islamic organizations interested in culture (UNESCO - Alexo - ISESCO), which will greatly contribute to the registration of Egyptian antiquities as a world heritage in UNESCO in particular.