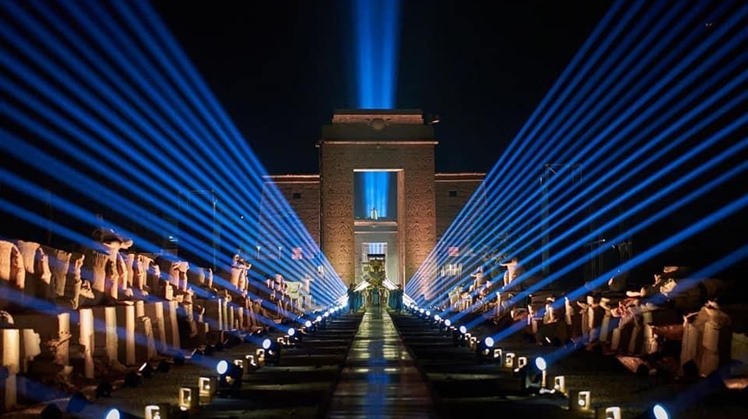 Fri, Nov. 26, 2021
The opening ceremony of the Sphinxes Avenue, the oldest corridor in the world, which links the Luxor and Karnak temples, has won international acclaim, with Spanish and Argentine newspapers covering it.

The Argentine newspaper, Infobay, praised the opening ceremony of Sphinxes Avenue
and said, "The ceremony was an epic scene and an impressive pharaonic parade. After 3,500 years, hundreds of sphinxes with a ram's head and a lion's body were restored, making the Sphinxes Avenue in Luxor "the largest open museum."

The Argentine newspaper pointed out that the Sphinxes Avenue turns Luxor into an open-air museum, which greatly stimulates tourism, and therefore Egypt is waiting for a boom in the tourism and employment field, as the tourism sector employs one million people, a sector that generates more than 10% of the gross domestic product, which bodes Egypt a boom in the economy in the coming periods.


The newspaper pointed out that every year, millions of tourists come to the sites of ancient Egypt, especially this corridor, which is about 3 kilometers long, and extends from the Karnak temple to ancient Thebes, the kingdom and city of the god Amun.

Hundreds of statues of mythical animals in Luxor, discovered in 1949, were the subject of controversy in mid-2020, as four sphinxes with a ram's head were separated from the others in the meantime.

And the newspaper pointed out that last April, televisions around the world broadcast pictures of a large march in Cairo that transported 22 black chariots decorated with golden and luminous decorations, reminiscent of ancient funerary utensils, and that was to transport the mummies of the kings and queens of ancient Egypt to the new National Museum of Egyptian Civilization.

As for the Spanish newspaper, "The Confidential", it said, "Egypt restores the splendor of Luxor with a wonderful pharaonic invocation that dazzled the world," noting that the presentation of the opening of the Sphinxes Avenue was a pharaonic-style parade through the ancient Sphinx Street, a passage between Luxor Temple and Karnak Religious Complex, which Through it, I showed the world the splendor of Luxor, which preserves the ancient ancient city, the imperial capital of Thebes.

The newspaper pointed out that this event is not the first of its kind for Egypt, which dazzled the world, so there was the so-called golden show last April in Cairo, and the government organized a global event with lights, music, dance and parade, with hundreds who were dressed in the clothes of the Pharaonic era.

The ceremony, which was broadcast live on all Egyptian televisions and shared via satellite with the rest of the world, was held alongside other tourist attractions such as the Valley of the Kings tomb, the Great Temple of Hatshepsut or the Luxor Museum.

This celebration, representing "Amon-Re" and thus the pharaoh himself, was conducted at times along the Nile, and at other times along the road, which at that time was running parallel to the river, with carried boats.

The "Sphinxes Avenue" was known in the past as the path of divine and royal processions and major celebrations, including the celebration of the Opet Festival, before the underground road was destroyed by the passage of centuries and the succession of times.

The celebration of the opening of the "Sphinxes Avenue" included an artistic performance inspired by the ancient Opet Festival, which was celebrated by the ancient Egyptians in the second month of the Nile flood 3,400 years ago and lasts for 27 days.

The Spanish newspaper, "La Bangordia", also said, "The opening of the huge Sphinxes Avenue with a great show that dazzles the world, as Egypt did earlier when it transferred the mummies to the Museum of Egyptian Civilization, adding that this project will greatly revive Egyptian tourism, as Luxor will turn into a museum open to all. Thus, the Egyptian economy will witness a recovery in the coming periods.

Over the past few months, Luxor Governorate has witnessed intensive development work to raise the efficiency of the infrastructure, develop and beautify the Corniche, its streets and squares, the restoration project of the colonnaded hall in Karnak temples, the development of lighting systems in Luxor Temple, the restoration of the 14-column hall in Luxor Temple, and the completion of the project of detection through the major processions. Known as the "Sphinxes Avenue".

And the newspaper continued in its report, entitled "The largest open-air museum .. Luxor reopens the Sphinxes Avenue", that this road will make Luxor look like one of the largest museums in the world.

The newspaper concluded its report by saying: Egypt has made great efforts to restore hundreds of stone sphinxes and rams, dating back thousands of years, painstakingly over the years in order to appear for the first time, today in a global event that attracts the world’s attention.