Transfer of the third cabin.. Learn the story of Tutankhamun's shrines before their display in the Great Museum 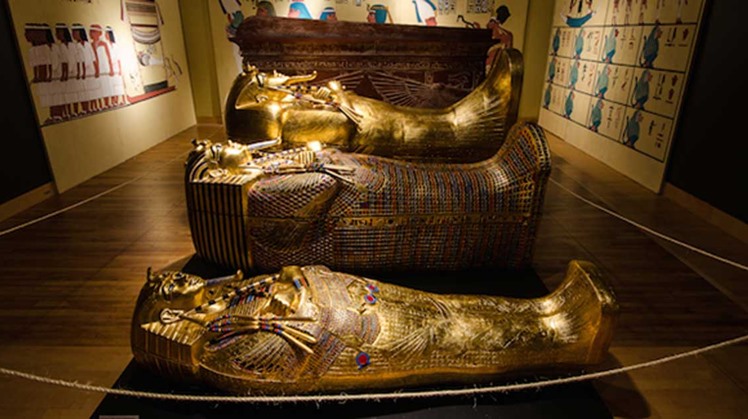 Wed, Oct. 13, 2021
A few days ago, the restorers and archaeologists of the Grand Egyptian Museum, in cooperation with one of the national companies, completed the work of moving and re-installing the second cabin of King Tutankhamun inside the window designated for it with the rest of the four chapels of the young king that were discovered during the discovery of the tomb in 1922 AD, and for this we review Details of those slots.

The four golden booths, which are boxes for keeping the sarcophagus in which the mummy is contained. They are made of gold-coated wood, and they are made of wood, the thickness of the wall is up to 3.2 cm.

The first and the largest compartment is an additional compartment placed over 3 other compartments until the sarcophagus is given to King "Tutankhamun." It consists of 20 parts, decorated from the outside and inside with the symbols of Isis and Osiris, and the second cabin was decorated with decorations from the outside and inside with wings, mythical eagles, scattered wings, pictures, writings and texts from the Book of the Dead, and it consists of 16 parts, and the third cabin has a very inclined roof for the second, but it is slightly smaller It consists of 10 parts.

In November 1922, British archaeologist Howard Carter found the tomb of Tutankhamun, containing the original rectangular sarcophagus made of quartzite stone. When the coffin was opened, the famous golden mask of the young king appeared around the mummy’s head. Magically engraved on the back.