Mosques with a history .. Prince Bashtak was built by a Mamluk who was bought by Al-Nasir Bin Qalawun for 6000 dirhams 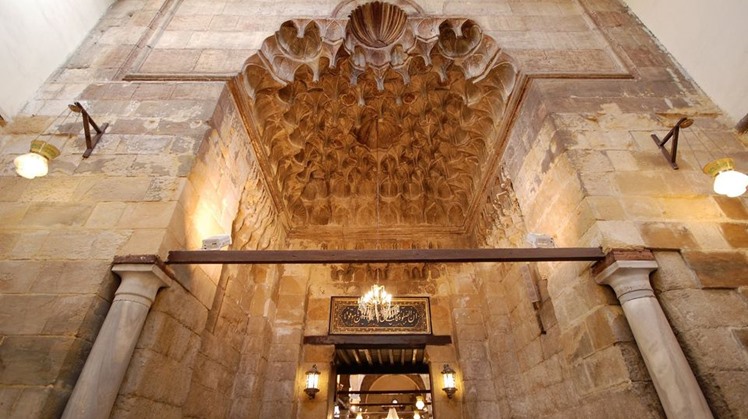 Wed, May. 5, 2021
Prince Bashtak Mosque “Fadel Pasha now”. This mosque is located on the eastern shore of the Egyptian Gulf, specifically in Darb Al Jamamiz Street in the Sayyida Zeinab neighborhood in Cairo. Only the door and the minaret remain of the original mosque.

Al-Maqrizi mentioned in his plans that the Bashtak Mosque was ordered to be built by Prince Bashtak, and it was completed in Shaban in 736 AH, and it is located on the elephant pool on its western side, and this elephant pool is located between Cairo and Al-Qat'at, and its area was very large with buildings, and the water of the Nile entered the pool of the elephant from The site, which was known as the Great Bridge or Qantara Sbaa, has now been replaced by Sayeda Zeinab Square.

In the year 1278 AH / 1861AD, when Mustafa Fadel's mother embarked on building a house facing the Bashtak Mosque, she ordered the building of a sabil and kuttabs to teach children at the al-Khanqah site. It has a new façade and door, and after these renovations, the mosque was known as the Mustafa Fadel Mosque.

The main façade of the mosque is located on the western side, and it is a simple façade erected by the renewal of the mosque, the mother of Mustafa Pasha Fadel, brother of Ismail Pasha, on the occasion of the establishment of the neighboring dirhams and he entrusted Ahmed Niyazy Bey for this charitable work, so Niyazi Bey renovated the building of the mosque from the inside of the old main entrance And likewise the minaret, but he created a new façade ahead of it, facing the door of the new façade is the old main entrance door, which is the entrance to a building made of stone with great depth, the corners of which are discovered by two columns, and on the side this entry was decorated with rectangular curves topped by three rows of pendants, and in the middle of the old entrance is a door surmounted by a lintel Narrow, marble slab with the date of restoration.

As for the owner of the mosque, he is Saif al-Din Bashtak al-Nasiri, one of the princes of al-Nasir Muhammad ibn Qalawun, whom al-Nasir bought for six thousand dirhams and was favored by al-Nasir, and the reason for his proximity to his teacher, King Nasser, was that the king said one day in the principle of his command to the glory of al-Din al-Salami, the trader of slaves: If he bought me a property similar to Bu Said bin Kharbanda, the king of the Tatars, then Majd al-Din said: Leave that.

Indeed, King Al-Nasir Muhammad bin Qalawun and his daughter’s wife approached him, as was appointed by Prince Biktamr al-Saqi after his departure, and he was proud of himself and did not speak with the public except with a translator, and although he knew the Arabic language, he did not speak it, and Bashtak al-Nasiri occupied several positions during the reign of the Sultan. Nasser Muhammad Qalawun.

One of the positions he held was the Emir of Shakkar in charge of the royal hunting and the clerk of the secret, and when he passed away, Biktamar Al-Saqi inherited him with all his money and his stable on the elephant pond and married his wife and bought his maid Hobe for six thousand dinars. That was how Qawsun managed to eliminate his opponent, Prince Bashtak, and he was arrested and imprisoned, then he was killed in Alexandria on the eighth of Muharram 742 AH.