King Shishnaq raises controversy in Algeria .. What did he do when he ruled Egypt? 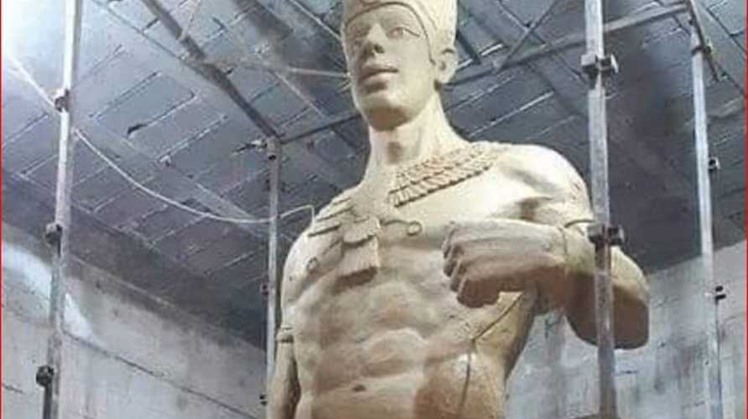 Wed, Jan. 13, 2021
A statue of King Shishnaq, designed by the Algerian sculptors Hamid Ferdi and Samir Salmi, in the form of a strong Pharaonic man, sparked a wide debate on social media about the origins of the statue whether it was Egyptian or Algerian of Egyptian or Libyan origins, which was placed in the city of Tizi Ouzou, Algeria, yesterday celebrated the occasion of the Amazigh New Year of the year 2971, or what is known as "January Day", and for this we review the life story of the king, who raised controversy.

The book "The Warrior Pharaohs: Diplomats and Soldiers" by Dr. Hussein Abdel-Basir says, although King Shishnaq I was of Libyan origin, he lived in Egypt and was raised in the land of Egypt, learned Egyptian culture, joined the Egyptian army, and married the daughter of the former Egyptian king. And he took over the rule of Egypt, performing an impressive military and political performance like any Egyptian pharaoh before imitating his predecessors from the great pharaohs, especially his great predecessor, King Thutmose III, and restored the glory of the Egyptian Empire to the countries of the ancient Near East after the Egyptian presence disappeared since the end of the era of the modern state and the end of the era of the pharaoh The great warrior King Ramses III.

The book "The Warrior Pharaohs ... Diplomats and Military" by Dr. Hussein Abdel-Basir says that he ruled Shishnaq I from 945 to 924 before the birth of Jesus Christ, peace be upon him, and was known as Shishnaq. Amon told the news of Ra, that Ra, and it was the beginning of the ancient Libyan branch that He ruled Egypt for a period of two hundred years, and King Shishnaq I linked himself to the previous family by marrying the daughter of the previous king, Busines II, and he further supported the position of King Shishnaq I because he came from a military background, as he was the supreme commander of all Egyptian armies.

Inscriptions coming from the current Taiba or Luxor area refer to him as the great leader of the Mushush tribe of Libyan origin, who was appointed by the Libyan tribes as an internal police force. In order to show himself as an Egyptian pharaoh capable of ruling Egypt, he took many royal titles for himself like his predecessors from the previous kings of Egypt, and specifically he took the titles of his predecessor, King Smendes, who preceded him by about a hundred years.

Dr. Hussein Abdel-Basir explained that King Shashanq I was a powerful ruler who united Egypt divided into two ruling cities: the first in Tanis in the east of the delta in the north, and the other good in the south, in one unified state under his ruling authority, and he was smart when he appointed Many of his sons are in important and sensitive positions in the state, and he combined in his hands the religious and civil authority and in one person.

The book "The Warrior Pharaohs" added that, after the death of King Solomon, both the kingdoms of Judea and Israel under the rule of Rehoboam son of Solomon and Jeroboam I were subjected to the strong Egyptian military attack led by King Shishnaq I, or King Shishak as the Torah called him, and the Egyptian king Shishnaq I defeated the two kingdoms badly. A defeat in the year 925 before the birth of Christ, peace be upon him, in a military campaign that the land of Palestine has not seen like it since the days of the great warrior King Ramses III, the last of the great pharaohs of Egypt.

The story returns in the beginning, as reviewed in the book "The Warrior Pharaohs", when King Shishnaq I moved against the Judean Kingdom, which was ruled by Rehoboam, and reached the ancient walls of Jerusalem. Pharaoh Shashanq I besieged the city, but he did not enter it because he was given “all the treasures of the house of the Lord, and the treasures of the king’s house, until he took everything and took all the golden bowls that Solomon made,” as mentioned in the Torah in the Book of Kings. And the first Shashanq took all the treasures of Solomon, except for the Holy Ark, then the Pharaoh headed to Israel, following Jeroboam, who fled to Jordan. Shishnaq I stopped in Megiddo, the same place where the most famous warrior Pharaoh King Thames III the Great fought and won for about five centuries ago, and erected a triumphal panel there in order for Shashang I to immortalize his victory in these lands as his predecessors from the great warrior pharaoh kings did.

The Pharaoh Shishnaq I photographed his victory on the walls of the temple of his god Amun at Thebes in southern Egypt. Quarries of the Nubian sandstone at Jabal Al Silsila in Aswan were reopened to supply it with the stones required for construction. Ibot, the chief priest of the god Amun, was the supervisor of these building works. A new great courtyard was built in front of the second edifice of the temples of Karnak, and the southern outer courtyard wall was decorated with a huge view of the victorious king Shishnaq I thanks to his god Amun, and many prisoners were seen falling because of the power of the tyrannical Pharaoh, as well as the captive cities that were subject to His Majesty's sultan. Pharaoh Shishnaq I.