The story of the second transition era .. Ahmose recaptures the land of Egypt and expels the Hyksos 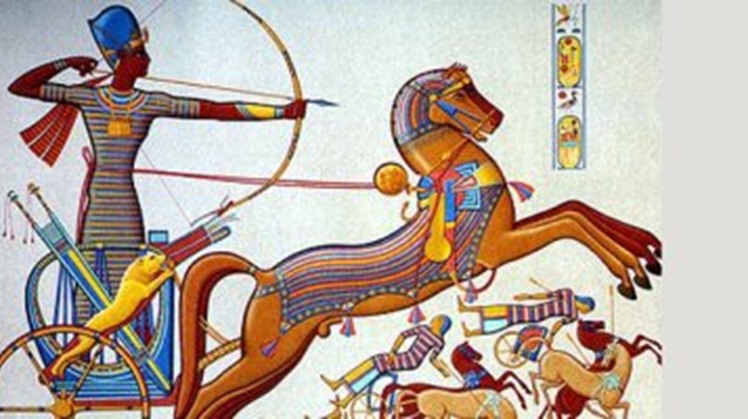 Sun, Jan. 10, 2021
During the Twelfth Dynasty of the Middle Kingdom, large numbers of immigrants from the Levant (the region of Palestine, Lebanon and Syria) began to arrive in Egypt, and most of them settled in the northeastern delta, and we know from a contemporary text of that period that one of the leaders of these immigrants was called “Hakka” Khasut "meaning ruler of foreign lands," which is the word most familiar to us today in its Greek form, "the Hyksos".

We do not know how the Hyksos came to power, but the weaker thirteenth family was not able to prevent this matter, as the national family moved their capital from Itt Tawi in the north to Thebes, "modern Luxor", in Upper Egypt, far from the sphere of influence of the Hyksos.

Thus began the era of the second transition at the hands of the fifteenth Hyksos family who established their capital in Awaris, "the modern hill of Dabaa" in the northeast of the delta, and succeeded in controlling most parts of the country from the north to the Qusay "ancient Qusai in Greek" in Middle Egypt, including The city of Memphis.

On the other hand, the Nubian civilization in the Karma region was progressing and succeeded in controlling the south, and between that force and the Hyksos, a group of local kings remained in upper Egypt controlling the vicinity of Thebes, and it seems that the mysterious fourteenth family, centered in Khois, modern Sakha, near Kafr El Sheikh "In the middle of the delta, it coexisted with the Hyksos at least at the beginning before fading away, and it seems that another short-lived family was stationed in Abydos.

The ancient Egyptian culture developed under the rule of the Hyksos, as well as the Bronze Age for the inhabitants of the Levant. Many aspects of this culture are evident in Awaris, such as the style of pottery, weapons, house planning and burial customs, for example their graves were located inside the living areas, and not in a cemetery outside the city as it was In the previous.

It is not known what distinguishes the movement from the Thirteenth Dynasty, which moved from Itet Tawi to Thebes during the sixteenth period, which itself moved to the seventeenth. Each of these dynasties was completely militarized, however, their power grew with the passage of time, the kings of the family were The seventeen is wealthy, experienced, and powerful enough to wage war against the Hyksos.

The two kings Taa Sqnen Ra and his son Kamis made a great military advance, and it seems that the first was martyred during one of the battles against the Hyksos, at which time Ahmose succeeded in retrieving the land from the Hyksos and was able to enter Awaris and expel the Hyksos from the country. South in Nubia.

These events represent the beginning of the eighteenth dynasty, the beginning of the modern state and the era of the Egyptian empire. The second transition era had long-term effects on Egyptian history, as new technologies were introduced into Egypt from the Near East, such as musical instruments, games, an advanced pottery wheel, new agricultural crops, and modern military technology, the most important of which are Compound bows, horses and war chariots, the Hyksos era left in the hearts of Egyptians in most parts of the country an indelible mark as the foreign invasion was a very real threat, and the frontier fortresses alone were not enough to protect the borders of Egypt, at that time the kings of the modern state pursued a strong expansionist policy.