Ancient Origins website claiming that Hatshepsut was disguised in the form of a man .. What is the truth about the Queen? 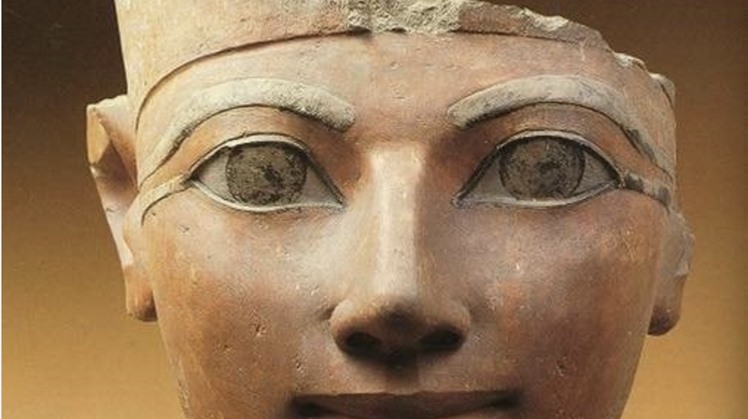 Sun, Jan. 10, 2021
Queen Hatshepsut is considered one of the most famous and most powerful queens of the pharaohs, and the life of this famous queen was exciting, and her death and the secret of her disappearance from the scene of events was more exciting, and recently an ancient foreign site claimed that after the death of her husband Thutmose II, she became the guardian of her son Thutmose III To gain legitimacy in the eyes of her subjects, and perhaps reach a compromise with her entourage, Hatshepsut changed her name to the male version of Hatshepsut, and was portrayed as wearing men's clothing and even wearing a false beard like a male.

In this regard, Dr. Hussein Abdel-Basir, Director of the Museum of Antiquities of the Library of Alexandria, said that Queen Hatshepsut was not subjected to distinction at all, and she was respected by everyone, as she is the daughter of Tuthmosis the First and Queen Ahmose, and she married her half-brother Thutmose the Second, and became his eldest wife.

Dr. Hussein Abdel-Basir explained that the Queen of Heliopolis began building a cemetery for her in a remote area west of the current city of Luxor, then left her to a new cemetery bearing No. 20 in the area of ​​the Kings Valley for burial of kings, and she gave birth to Hatshepsut from her husband Thutmose the Second, a single daughter, Princess Nefro Ra. Without a male heir, Thutmose II died after a short period of rule - about 13 years - and the ruling went to his son Tuthmosis the Third, who was his son from Isis, one of his wives from the royal harem.

And since Tuthmosis the Third was a child, and his mother Isis was ineligible for guardianship over him because she was not of royal blood, the ambitious and powerful queen Hatshepsut took custody of her husband's son for a while, then her ambition, the glamor of power, the magnificence of the throne and the lure of the ruling, acted as a male king, and she was mentioned in Texts and their depiction in scenes in the form of male kings.

Hatshepsut did not forget her husband's son, Thutmose III, and considered him a partner with her in ruling, and she dated the events of the years of their rule together, starting from the first year of Thutmose III's accession to the throne, except that she was the only king in control. At the end of her life, Thutmose III attained an equal status.

The end of Hatshepsut's reign is one of the mysterious things in the history of that apparent queen. For a short time, we did not know how her life ended, and why her pictures and names were erased from her monuments until recent scientific research by Dr. Zahi Hawass and the Egyptian Project Team to study royal mummies on the mummy of Queen Hatshepsut and the effects of her reign came.

And the book "Queens of Egypt" by Dr. Mamdouh al-Damati explained that according to Egyptian religious traditions, Hatshepsut was considered to be outside the religious legitimacy of the rule, as the ruling king must be a male representative of the deity Horus, the lord of the monarchy, in order to grant religious legitimacy and acceptance among the people, so the status of Hatshepsut was required. Some political and religious treatments to protect her accession to the throne, especially since she began as a guardian on the throne of the king, the official is Tuthmosis the Third, and given that he was a small child, and the mother of one of the concubines of King Thutmose II, with the intelligence of Hatshepsut and her ambition to rule, which may have begun to practice during the reign of her brother and her husband The weak Thutmose II, the political conditions in the ruling house created the opportunity to ascend the throne and rule alone, even if it was a formal partnership with the young king.

While the great archaeologist Dr. Zahi Hawass said recently about the features of the queen's mummy, saying: Hatshepsut was a fat queen, and her teeth were decayed, and she passed away when she was 55 years old, and she was sick with diabetes, and she died of cancer, and all this was revealed through a CT scan. ,

The book "Leaders of Pharaonic Egypt - Hatshepsut" published by the family library says, we know about Hatshepsut very little from her personal life, as there are very few private documents that she wrote or wrote about, but we do not even know what she looked like. This gap in our knowledge combined with the fact that many of its relics and inscriptions were destroyed, very soon after their death.