The Museum of Civilization receives a number of archaeological collections from the excavation works. 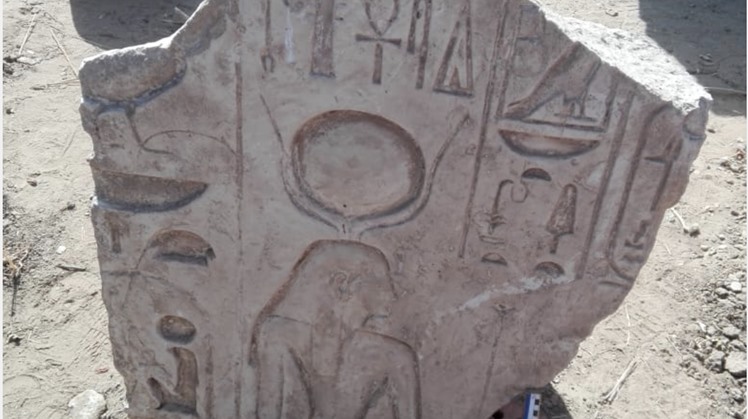 Tue, Oct. 27, 2020
The National Museum of Egyptian Civilization in Fustat received a variety of important archaeological collections that were recently discovered during the excavations carried out by the Ministry of Tourism and Antiquities in the city of Memphis and its cemeteries in Saqqara, as part of the preparation and preparation for the imminent opening of the museum.

The group includes a number of statues, including a 79 cm high granite statue of one of the Egyptian deities wearing a long robe and a wavy wig topped with a crown and holding the Ankh sign "life" in her right hand, and the sculpture of the statue is very accurate and beautiful, in addition to a number of wall paintings, including A painting with an inscription showing the goddess Hathor in the form of a lady with a cow horn between her head, between the sun disk, which symbolizes motherhood, love, beauty, the patroness of childhood and music in ancient Egypt.

The Museum of Civilization also received a group of other holdings, which is a large alabaster vessel with an ornament known as the decoration of the coiled rope, it was found inside the pyramid of King Djoser, inscribed in Saqqara about 4,650 years old, and a statue of a senior employee in the Fourth Dynasty called Ankh Baby, and a funeral stela with a top A hierarchy by a writer from the Amarna era called Hor Nakht, and a distinctively made red pottery vessel with four nozzles and ten handles, as well as a necklace made of semi-precious stones "red agate" was transported.

Dr. Ahmed Ghoneim, Chairman of the Executive Board of the National Museum of Egyptian Civilization, explained that the central exhibition hall, which has an area of ​​about 2,300 square meters, will be displayed in it, and about 1,500 archaeological and heritage masterpieces representing the emergence and development of Egyptian civilization through the ages "from prehistoric times to ages" Modern and contemporary ", and the Royal Mummies Hall will be opened, to which 22 mummies of the great kings and queens of Egypt will soon be transferred from the 17, 18, 19 and 20 families in a huge ceremonial procession witnessed by the whole world, and those halls will be equipped with the latest means and methods of presentation and modern explanation of films Documentaries, interactive screens, illustrations, cards, and technology applications.