Near the opening .. What do the new Egyptian museums offer to the public? 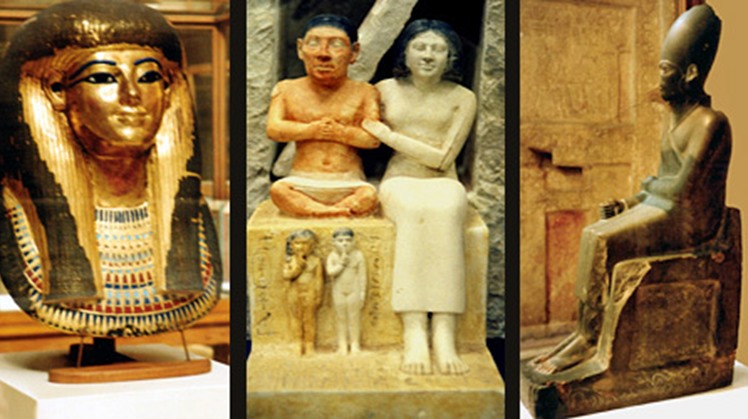 Sun, Jul. 12, 2020
The Ministry of Tourism and Antiquities is working to open a number of new archaeological museums in front of the public, within the framework of the Egyptian state’s interest in archaeological sites and museums, and among the museums scheduled to open next month is the Kafr El Sheikh Museum, the Capital Museum and the airport, and the partial opening of the Sharm El Sheikh Museum, so what do these museums offer to visitors? .

The museum is located next to Kafr El-Sheikh University in Sanaa Park, and the building consists of a number of museum exhibit halls, auditoriums, museum museums and seminars, in addition to a service building containing a group of cafeterias and bazaars.

The museum includes 3 halls "The Main, Bhutto, The Periodic Display", Bhutto Hall The most important halls of the museum and includes the results of the work of archaeological discoveries from different eras and the archaeological area of ​​the Pharaohs Hill, which is the ancient city of Bhutto, the oldest Pharaonic capitals in the year 320 BC.

As for the main exhibition hall, it includes several halls that are divided thematically and historically according to the different historical eras, including the era of the Pharaonic families and the Greek and Roman eras, in addition to the ages of Byzantine, Coptic and Islamic rule.

Sharm El Sheikh Museum
Sharm El-Sheikh Museum is located on the airport road on an area of ​​191,000 square meters. The building consists of 6 halls, a conference hall, a basement, a number of shops for heritage crafts, an open theater and a number of restaurants. The museum can hold 20 thousand artifacts.


The idea of ​​the museum display scenario revolves around the Sharm El-Sheikh Museum, which will reflect the daily life aspects of the ancient Egyptian as well as in the modern era, so that the artifacts narrate the extent of the civilized progress that the ancient Egyptian was experiencing, as he excelled in making chairs, tables, and a comfortable family, and he decorated the table with flowers and ate and drank in dishes And cups of porcelain of various shapes and colors and wore the latest fashion.

The scenario of the museum exhibit also includes a wildlife show, and how the ancient Egyptian cared about animals, birds, reptiles and insects in terms of raising, sanctifying, domesticating or treating them, stressing that for the first time a huge display of animal and bird figures will be displayed.


Dr. Mahmoud Mabrouk, the minister’s advisor for the museum exhibit, explained that among the most important pieces included in the museum exhibit in the Hall of Civilizations, are the inner and outer sarcophagus of Eastm “East Umm Khub” wife of Banjam II and the priestess of the goddess Isis and the goddess Maine and Horus in Akhmeem, from the era of the family 21 which was found in The cache of the Deir el-Bahari, also the canopic utensils, the East Em Khub papyrus, a set of stage utensils and cosmetics, and the head of Queen Hatshepsut, which was found in the funerary temple of Hatshepsut in 1926, in the seaside monastery and a group of tanagra statues for women with different clothes and styles, and a set of Sinai heritage.

As for the Great Hall, it expresses human and wildlife in ancient Egypt, the interests of the ancient Egyptian in science, sports, industries and crafts that distinguished him and his presence in his family and family life, and his relationship to the environment around him and how he was animal-loving to the point of sanctification, where a set of stuffed animals is presented from the product Popastian fossils in Saqqara such as cats and scarabs, as well as baboon, crocodile and falcon in the animal shape and human body.

The New Administrative Capital Museum
The museum consists of a main hall showing the relics of a number of 9 ancient and modern capitals of Egypt, as follows: Firstly, on the right of the visitor, there are 4 capitals, namely Memphis, Thebes, Tel el-Amarna, Alexandria, and secondly to the left of the visitor are 4 capitals, Fustat, Cairo Fatimiya, modern Egypt, Khedive Cairo, thirdly, the second level, which is behind the statue of King Ramses the second and belongs to the administrative capital, and displays in this hall a group of different holdings that represent the lifestyles of each individual epoch-era, such as decorations, war and fighting tools, and a system Judgment and various correspondences.

The second section is a pavilion representing the other world of the ancient Egyptian. This part consists of Tutu's cemetery, in addition to a mummy hall, coffins and maidens containing canopic vessels and a set of fake doors and alternative heads that simulate religious rituals in ancient Egypt.

Cairo International Airport Museum in Hall 3, the 12 artifacts were chosen by the Supreme Committee for Museum Scenarios to enrich the museum show, and included three mummies decorated with gilded cartons and colorful drawings that were in the stores of the Egyptian Museum of editing, and another group of canopic vessels and a statue of the god Winged Isis made of bronze, and statues of the Greek and Roman eras from the Suez National Museum.