Want to visit the Egyptian Museum? These 30 pic will take you there 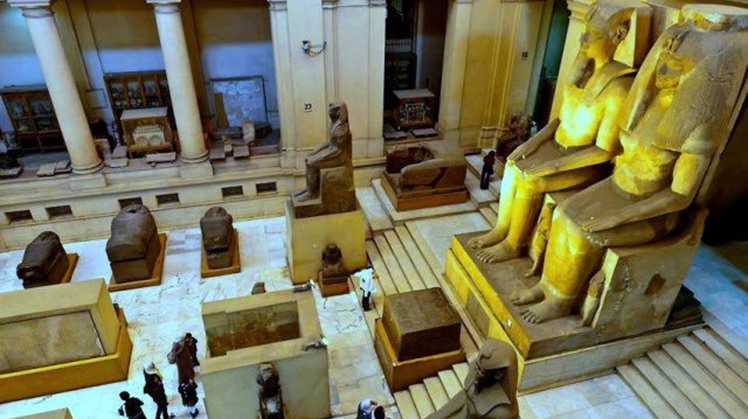 Wed, Mar. 25, 2020
Due to the spread of Corona virus, which is spreading among the societies of the whole world, a large number of countries, including Egypt, have taken precautionary measures to confront the virus, including the closure of museums and archaeological sites, from Monday 23 March to 31 of the same month, in order to sterilize, disinfect and implement safety measures And prevention in cooperation with the Ministry of Health and Population and in accordance with international standards, and for this we review during the next report a number of pictures of the Egyptian Museum of Liberation one of the largest archaeological museums around the world, who wants to enter and visit the museum, during the period of prevention from the virus.

The Egyptian Museum of Editing is one of the most important and prominent international museums, and it contains very rare artifacts, dating back thousands of years, and the Ministry of Antiquities celebrates the 117th anniversary of its opening today, by organizing two temporary exhibitions, inside the corridors of the museum.

The creation of the Egyptian Museum came with editing after Khedive Ismail approved the project of establishing an Egyptian antiquities museum in 1863, behind the idea of ​​establishing the museum the French Egyptologist Auguste Mariette, the first commissioner of antiquities and head of the Antiquities Authority in 1858, and found that there must be a management and museum of antiquities, so he chose Bulaq area, to create a museum of Egyptian antiquities, and to transfer the relics found during its excavations (such as the relics of Aahotep's tomb).

The museum's design was chosen from among the 73 designs presented in the past to the officials, while the design of the French engineer, "Marcel Dornon", which he built in the style of classic Greek-Roman architecture, while the facade of the museum is in the French style with circular contracts, decorated with marble panels of the most famous and famous archaeologists in the world, On the sides of the entry door are two large gravel statues of two Roman-style women, but with a pharaonic head.

On November 15, 1902, the second museum of Abbas Helmy was officially opened to the Egyptian Museum. The museum includes more than 150,000 artifacts, the most important of which are the archaeological collections found in the tombs of kings and the royal entourage of the Middle Family in Dahshur in 1894, and the museum now includes the world's largest archaeological collection All phases of ancient Egyptian history, as well as the king Montuhab II and a group of statues of some of the kings of the family of 12, as well as the group of Tutankhamun and the statues of Hatshepsut and Tuthmosis III and Ramses II in addition to the war wheels.