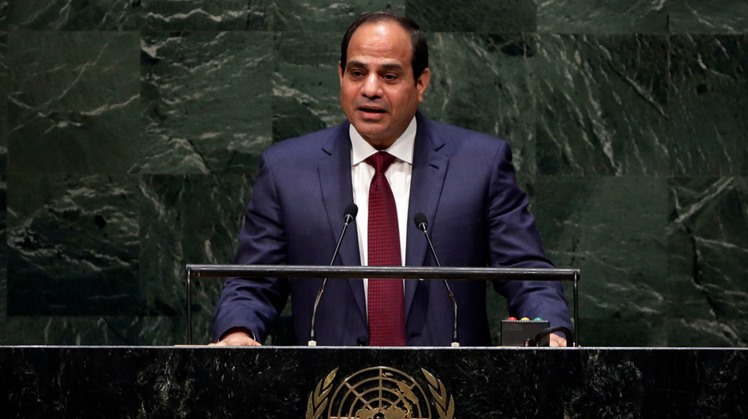 CAIRO - 3 August 2019: Since the inaugural address on June 8, 2014, Al-Sisi has emphasized the importance of Egypt's foreign policy, which affirmed that Egypt has the necessary elements to be open in its international relations and that Egypt's foreign policy be determined according to the willingness of friends to cooperate and achieve the interests of the Egyptian people. Mutual respect and non-interference in the internal affairs of other countries, based on the principles of Egyptian policy, based on the support of peace and stability in the regional and international environment, and the promotion of the principle of mutual respect between countries, and adherence to the principles of international law, international organizations and to promote solidarity among nations, as well as attention to the economic dimension of international relations.

Egypt has been able to achieve significant success in foreign policy in different Arabic, Islamic, African and international constituencies. Egypt regained its prestige and its pivotal role in the region and the world, achieving many of its objectives and interests.

Egypt has notably reaffirmed regional and international network, and achieved the objectives of the Egyptian national security, military and economic.

At the level of the Arab dimension, Egypt's foreign policy themes have been grounded in the need to preserve the unity and cohesion of the Arabic countries..

As for the position of the Egyptian administration on the Syrian issue, President Al-Sisi said, 'There is no place for a military solution in that crisis, the political solution is the only solution, and the essence of the solution is to preserve the unity of the Syrian state.'.

On the Libyan issue, President Al-Sisi stressed Egypt's clear position which is based on three basic principles: respect for the unity and sovereignty of Libya and its territorial integrity, non-interference in the internal affairs of Libya, the maintenance of political independence.

On the Yemeni crisis, President Abdel-Fattah al-Sisi said that' the unified state is the only way to overcome crises and achieve legitimate goals for Yemen and the Arabs.’

As for the African dimension, which is of utmost importance to the Egyptian decision-maker, especially since the African circle is closely and directly linked to the Egyptian national security, the mutual visits between the president and the African leaders reflected a remarkable transformation in the Egyptian-African relations. The successful return to Africa was not only an official return to the African Union and its institutions, but an effective and positive return with all the countries and peoples of the continent. The President affirmed that Egypt will continue to be supportive of the African continent, based on its pride in its African belonging and its belief in linking its future with the future of the African countries, and its great interest in supporting all economic integration efforts among the countries of the continent.

Since his inauguration in 2014, President Abdel Fattah al-Sisi has been keen on opening up to the African continent and strengthening Egypt's relations with its countries in all fields. In this context, the quantitative analysis of President Abdel Fattah al-Sisi's foreign visits and international meetings with leaders and officials since he assumed the presidency until the end of 2018, he visited 25 African countries out of the total of 86 foreign visits by the President, accounting for about 30% of the total foreign presidential visits. Ethiopia has been ranked first in the visits of the African President al-Sisi in five visits ranging from Zia, and the participation in the regular meetings of AU summits. The Sudan also received an important position and a high priority in Al-Sisi’s foreign visits. The visits to Sudan as well reached four visits during the first presidential term.
In the interest of partnership with African and Islamic countries, the Egyptian Agency for Partnership for Development was established by the Prime Minister's Decision No. 959 of 2013, which is chaired by the Minister of Foreign Affairs and announced by President Abdel Fattah al-Sisi in his speech to the 23rd African Union Summit in Malabo In June 2014.


The Prime Minister's decision determined the Agency's tasks in providing technical support and humanitarian assistance to African and Islamic countries, organizing training programs and workshops, dispatching specialized experts, providing technical and humanitarian assistance, financing and mobilizing funding for African development projects and enhancing cooperation with the UN and its specialized agencies and countries. Developed within the framework of North-South cooperation, as well as cooperation with a number of Asian, Latin American and international development agencies within the framework of South-South cooperation in favor of African States.

The "Africa Forum" is represented in its three sessions: 2016, 2017 and 2018, all held in Sharm el-Sheikh, one of the pillars of the Egyptian strategy to move towards the African continent. It is organized by the Ministry of Investment and International Cooperation, the African Development Bank, with the participation of Heads of State and Government, senior government officials in Africa and the world, as well as international entrepreneurs with current and potential investments in Africa, representatives of international financial institutions and experts and academics concerned with the African economy.

On the global level, Egypt's foreign policy trends have succeeded in achieving balance while maintaining good relations with the United States, Europe and Japan and opening up to other forces such as Russia and China.

The Egyptian-Russian relationship has developed well, The Egyptian and Russian presidents signed several agreements and memoranda of understanding and cooperation in all fields, especially economic, military and energy.

The Egyptian-European relations also witnessed bilateral relations through the repeated visits of the President to Germany, Italy, Britain, France, Hungary and Portugal, China or multilateral parties such as the tripartite cooperation mechanism with Greece and Cyprus.

President Abdel-Fattah al-Sisi also affirmed Egypt's commitment to its strategic partnership with the United States of America and its keenness to develop and strengthen it in various fields. This was reflected in meetings, statements and interviews with Trump and with US political and legislative circles representing Congress.

Egypt has succeeded in achieving political rapprochement and opening prospects for economic cooperation with Latin American countries. This was highlighted by President Sisi's chairmanship of the delegation participating in the Fourth Arab and Latin American Summit in November 2015, which resulted in the support of many Latin countries for Egypt's membership of the Security Council, on a non-permanent seat at its 2016-2017 session.

The Asian circle is the new focus of interest of President Abdul Fattah al-Sisi. New relations were opened in Asian countries. China, Indonesia, Kazakhstan, Japan, South Korea and Vietnam, all of which Egypt aimed to benefit from their experiences in areas such as development, education and industry.

Egypt has reaped the benefits of its new foreign policy by obtaining a non-permanent seat on the Security Council, chaired the Counter-Terrorism Committee of the Council, chaired the Arab Summit, combined the membership of the African Peace and Security Council and the African Heads of State and Government Committee on Climate Change. . Abdel Fattah Al Sisi, participated in the G-20 Summit, the most important international economic forum that deals with issues affecting the global economy, which contributed to making the African voice present at this summit.

Egypt's relations with the countries of the world and its great powers have been strengthened. This has been reflected in the fact that many countries have supported Egypt and supported its national project politically, economically and militarily

Ashraf Singer is a Research Fellow in World Politics, Trans-Research Consortium at Claremont Graduate University, California and Member of the Egyptian Council for Foreign Affairs