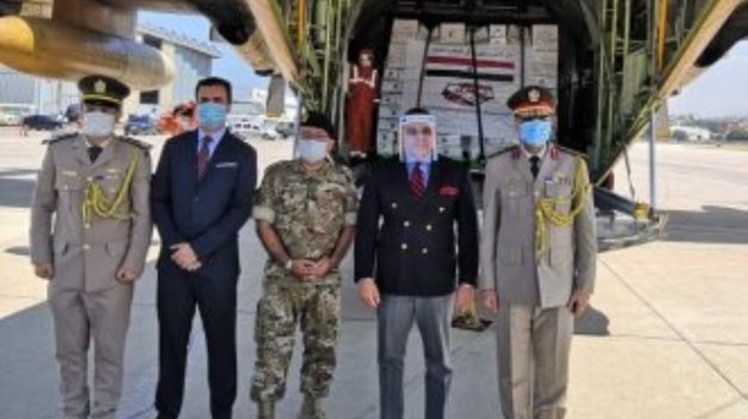 The 13th and 14th aid planes touched down in Beirut as part of an airlift ordered by Egyptian President Abdel Fattah El Sisi to help the Lebanese people overcome a crisis caused by the massive explosion that rocked the major port in the capital on August 4.

The flights carried about 30 tons of relief and food aid, as well as medical equipment offered by Egypt.

Egyptian Ambassador here Yasser Elwi and Consul General Ahmed Emam were at the airport to receive the shipment.

Two days ago, two Egyptian planes carrying about 27 tons of relief assistance, foodstuffs, and medical supplies arrived in Beirut-Rafic Hariri International Airport provided by the Egyptian Church and Al-Azhar, in addition to civil society institutions that include about 11 entities.

These are the eleventh and twelfth planes carrying large amounts of relief aid to be sent by Egypt to Lebanon as part of an airlift ordered by Egyptian President Abdel Fattah El Sisi to help the Lebanese people in the aftermath of the recent deadly explosion that hit Beirut.

On 20 August, Beirut Airport had received a military plane carrying 38 tons of relief and food aid, including 5 tons coming from Egypt. This was considered the 10th plane sent as part of the relief air bridge Egypt launched in the wake of the massive Beirut port explosion.

The Egyptian airlift to Lebanon will continue to provide aid until August 26. Egypt is also ready to contribute to the reconstruction of the main ports in Lebanon after a total of 250,000 housing units were hit by the explosion.

Lebanon had received the seventh and eighth planes on August 17 that contained huge amounts of necessary aid to the Lebanese people as part of an airlift ordered by President al-Sisi.

The Egyptian airlift’s fifth and sixth aid-laden planes had arrived on 15 August at the Beirut-Rafic Hariri International Airport. The 14-ton assistance carried by each plane was sent in line with directives of President Abdel Fattah El Sisi to support Lebanon after a recent massive Beirut blast which left behind about 6,000 people injured.

The first stage of the airlift included sending four aircraft which carried foodstuff, especially flour to help Lebanese bakeries to go on after Lebanon lost its strategic stock of wheat and flour.

Earlier, al-Sisi issued directives on establishing an airlift between Cairo and Beirut to carry large amounts of food aid and other relief supplies to the Lebanese people, stressing that the airlift should be grouping a specialized medical staff to help offer medical assistance to those harmed by the blast which left about 6,000 persons wounded.

The Egyptian plane also contained about half a ton of medical and surgical tools and supplies onboard.