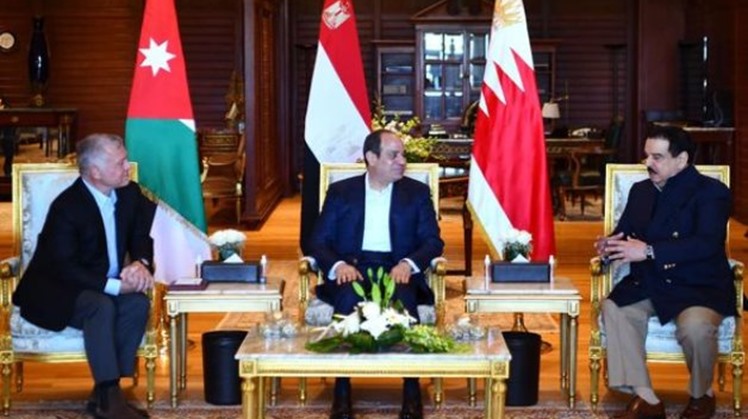 
President Sisi said that Egypt looks forward "to bolstering the constructive cooperation" among the three countries, as "it fulfills the interests of their peoples, and reinforces joint Arab action in light of the enormous challenges ensued from the several regional and international developments," the presidency's statement reads.

On their side, the kings of Bahrain and Jordan expressed eagerness for augmenting collaboration with Egypt to the level of the strategic partnership. That is because such step would optimize benefiting from the chances and capabilities lying in the joint relations, preserving regional stability and security, and reinstating balance in the region.

The talks mainly covered cooperation, coordination in dealing with issues of mutual concern, developments on the regional and international levels, and challenges facing the region.

The three leaders also expressed satisfaction with the summit held by Saudi Arabia with the chiefs of state of the United States, Gulf Cooperation Council (GCC) countries, Egypt, Jordan, and Iraq.

The Royal Diwan of Saudi Arabia announced Tuesday that U.S. President Joe Biden would attend on July 16 a summit encompassing the heads of state of Gulf Cooperation Council (GCC) countries, as well as Egypt, Jordan, and Iraq.

Biden's tour in the Middle East also comprises Israel and Palestine, as his arrival is set for July 13.

The last direct contact between Egyptian President Abdel Fattah El Sisi and US President Joe Biden was on May 24, 2021. That is when the latter called the former to discuss the failure of negotiations – among Egypt, Ethiopia, and Sudan - on reaching a legally binding agreement on the filling and operation of the Grand Ethiopian Renaissance Dam (GERD).

“Both presidents agreed to intensify diplomatic efforts in the coming period to reach an agreement that preserves water and development rights for all parties,” the Egyptian Presidency's statement indicated.

The US President had also affirmed that his country would deploy efforts to ensure Egypt's water security would not be put in jeopardy.

The first phone call between the two presidents took place on May 20, 2021, after Egypt had brokered a ceasefire, which was endorsed by the United States, between Israel and Gaza Strip.