Opening soon: How many pieces has Sharm El Sheikh Museum received so far? 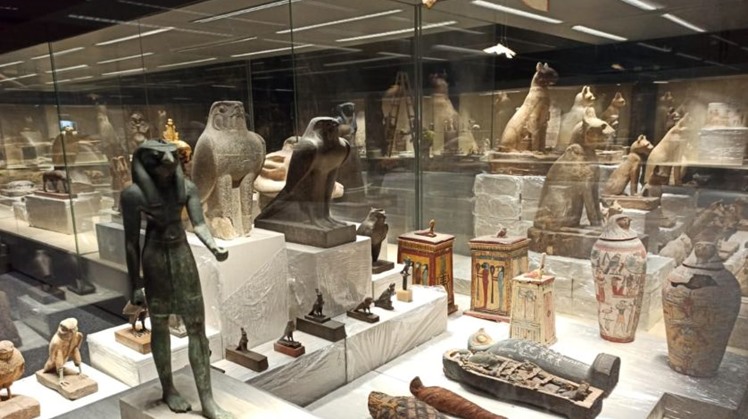 Sun, Sep. 20, 2020
The Ministry of Tourism and Antiquities is racing against time to quickly complete the development of the Sharm El Sheikh Museum, within the framework of the state’s interest in opening museums in coastal cities. The museum is located on the airport road on an area of ​​191,000 square meters, and the building consists of 6 halls, a conference hall, a basement, a number of traditional crafts shops, an open theater and a number of Restaurants, and the museum can accommodate 20 thousand artifacts

Work in the museum has been resumed since September 2018, after a hiatus of about 8 years, specifically in the aftermath of the January 2011 revolution, due to the lack of the necessary funds. The museum includes six exhibition halls, an administrative building, a cafeteria, a building for restaurants and cafeterias (Food Court), and a building for bazaars. , Antique shops, an open theater, a rest building for employees and internal security, 17 shops in addition to 11 places for archaeological and heritage crafts.

The idea of ​​the museum display scenario for the Sharm El Sheikh Museum revolves around the aspects of the daily life of the ancient Egyptians as well as in the modern era, so that the artifacts narrate the extent of civilization progress that the ancient Egyptian lived, as he excelled in making chairs, tables and comfortable beds, and he used to decorate the table with flowers and eat and drink in dishes Porcelain cups were of different shapes and colors and he wore the latest fashion.

The museum exhibition scenario also includes a presentation of wildlife, and how the ancient Egyptians cared about animals, birds, reptiles and insects in terms of raising them, revering them, domesticating them or treating them, stressing that for the first time a huge display of animal and bird shapes will be made.

The museum has so far received more than 6062 artifacts from several stores and archaeological areas from various parts of the Republic, including the stores of the Marina in Alexandria, the Marina in Al-Alamein, the Ismailia antiquities, the antiquities of Beni Suef, the museum store in Kom Ombo, and the Egyptian Museum in Tahrir.

The last pieces received by the museum, a rare piece of mosaic from Alexandria dating back to the fourth century BC, a statue of the god "Eros" hunting deer, which is scheduled to be displayed at the entrance to the museum, and another rare statue of the deity "Bes" from incomplete burning clay and will be placed In the "Man and Wildlife" hall.

Dr. Mahmoud Mabrouk, advisor to the minister, explained to the museum display that one of the most important pieces included in the museum display at the Hall of Civilizations is the inner and outer sarcophagus of East M, "East Umm Khub", wife of Panjam II and the priestess of the goddess Isis and the deities Min and Horus in Akhmim, from the 21st Dynasty. The Deir el-Bahari cache, also the canopic pot boxes and the East M papyrus, a set of pot vessels and cosmetics, and the head of Queen Hatshepsut, which was found in the funerary temple of Hatshepsut in 1926, in the Deir el-Bahari and a group of Tanagra statues of women in different clothes and styles, and a group of Sinai heritage.

As for the Great Hall, it expresses man and wildlife in ancient Egypt, and the ancient Egyptian's interests in science, sports, industries and crafts that characterize it, his presence in his family and his family life, and his relationship to the surrounding environment and how he loved animals to the point of sanctification, where a group of stuffed animals is presented from the product of The excavations of the Bubastians in Saqqara, such as cats and scarabs, as well as baboons, crocodiles and falcons in animal and human form.