President of the International Federation of Publishers: The publishing sector in the world is witnessing a real revolution and rapid developments 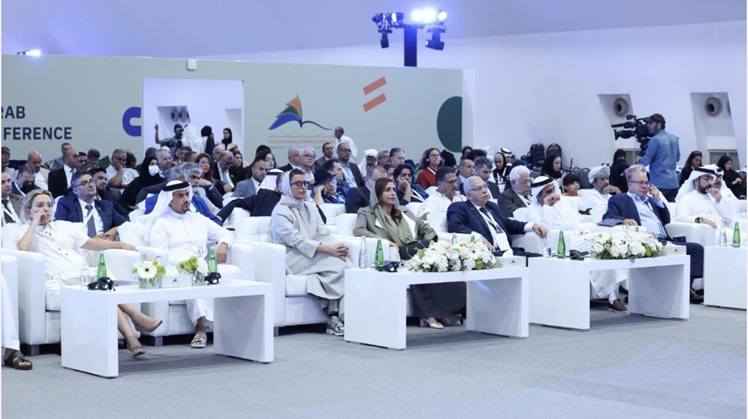 Wed, Nov. 2, 2022
Under the patronage and presence of Sheikha Bodour bint Sultan Al Qasimi, President of the International Publishers Association, the activities of the first day of the sixth session of the "Arab Publishers Conference" were launched today, Wednesday, at the Expo Center Sharjah, under the slogan "Content Industry and Post-Pandemic Challenges", coinciding with the first day of the session. The 41st Sharjah International Book Fair, with the participation of 35 Arab publishers and speakers, will discuss today and tomorrow a range of issues and topics that revolve around the future of the Arab publishing industry.

The conference was organized by the Emirates Publishers Association and the Arab Publishers Association, and in partnership with the Sharjah Book Authority, with the participation of Noura Al Kaabi, Minister of Culture and Youth, Mohamed Rashad, President of the Arab Publishers Union, and Dr. Ali bin Tamim, President of the Abu Dhabi Center for the Arabic Language, and in the presence of Ahmed bin Rakad Al Ameri. , Chairman of the Sharjah Book Authority, and representatives from the Arab League, guest of honor for the conference.

In the opening speech, Sheikha Bodour bint Sultan Al Qasimi shared three lessons that were inspired by her during the two years of her assumption of the presidency of the International Federation of Publishers, during which she attended many book fairs and met with representatives of publisher associations in more than twenty-five countries, and indicated that these lessons are summarized in the necessity of working Interaction with the publishing sector at the global level, and the paramount importance of strengthening bilateral and regional cooperation between publishers, in addition to the impact of policies to promote diversity and inclusion on achieving positive change.

Sheikha Bodour said: "The publishing sector in the world is witnessing a real revolution and rapid developments that require the Arab publisher to realize it through continuous and active interaction with international publishers, regional and global publishing institutions and associations, and international organizations, to remain an important party in global dialogues about the present and future of the publishing industry."

She added: "Important success stories in the publishing industry were the result of effective bilateral regional cooperation between publishers belonging to the same region, especially those that share language or cultural values, which requires Arab publishers to be keen on strengthening bilateral Arab regional cooperation to invest common resources to reach more readers around the world, and enhance opportunities for growth.

The UAE supported the prosperity of the publishing system
In turn, Noura Al Kaabi, Minister of Culture and Youth, pointed to the importance of convening the Arab Publishers Conference with the Sharjah International Book Fair, noting that the exhibition is one of the major Arab and international cultural events, because of its positive impact on the Arab publishing system.

She explained that what the publishing sector in the Emirates is witnessing in terms of growth and an increasing demand for investment in the book industry is the fruits of the UAE’s successes over the past years in developing exhibitions, launching literary prizes, providing facilities and issuing legislation that serves publishers and authors, protects their rights and supports the prosperity of the publishing sector system. locally and regionally.

In turn, Muhammad Rashad, President of the Arab Publishers Association, praised the patronage of Sheikh Dr. Sultan bin Muhammad Al Qasimi, Member of the Supreme Council, Ruler of Sharjah for Culture, and the Ruler of Sharjah’s support for the publishing industry. and Bologna), stressing the importance of holding the sixth session of the Sixth Arab Publishers Conference in Sharjah, the capital of the book and the city of culture and arts, which is full of libraries, museums, theaters and art halls in its various branches.

In turn, Iman Bin Shaybah, Vice-President of the Emirates Publishers Association, indicated that the Arab Publishers Conference aims to discuss ways to accelerate publishers’ innovation of ways to help reach the reader better, and meet the interests of various segments of society, especially students and scholars, following the increasing spread of the (distance) education method. ), which made the task of creating and developing Arabic content a priority for every publisher.

The first session of the conference came under the title "Book Fair in the Age of Digitization", in which Dr. Ali bin Tamim, President of the Abu Dhabi Center for the Arabic Language, Iman bin Shaybah, Vice President of the Emirates Publishers Association, and Dr. Jamal Yahyaoui, Director of the National Book Center in Algeria, participated. Dr. Shukri Al-Mabkhout, Tunisian writer, critic and academic, and Ali Abdel Moneim, publisher and publishing consultant from the Arab Republic of Egypt, and moderated by Lebanese publisher Antoine Saad.

Dr. Ali bin Tamim spoke about book fairs as an essential link in the publishing industry and creative industries, noting that the fairs will remain incubators for various media of knowledge and books, whether paper, audio or electronic, and that digitization does not cancel book fairs, because digital development makes exhibitions wide celebrations. Knowledge includes types of books in various media.

In turn, Iman bin Shaybah explained that sales of paper books in exhibitions are still more than digital books, with the exception of the pandemic period, which witnessed an increase in sales of platforms that offer digital books, noting that many readers prefer paper books, and she pointed out the importance of publishing houses to combine publishing Digital and traditional to reach different readers.

As for Jamal Yahyaoui, he pointed out that talking about digitization requires highlighting the reading rate in the Arab world and the extent to which it keeps pace with the new knowledge media, because digitization enhances diversity in the means of publishing, and enhances the book’s access to the largest segment, in light of the increasing spread of smart devices in the hands of young people and their direct connection. The style of reading imposed by modern technology.