The completion of raising the efficiency of services in 13 archaeological sites, most notably the Abu Simbel Temple 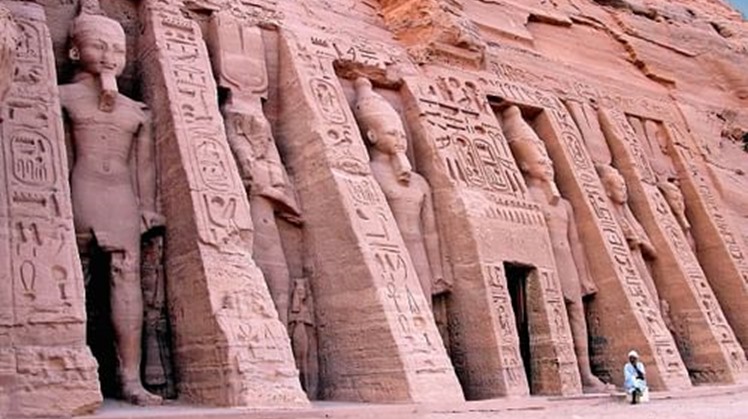 Thu, Jul. 28, 2022
The Ministry of Tourism and Antiquities has completed a project to raise the efficiency of visitor services in 13 archaeological sites and museums in Aswan Governorate. Among those sites is "Abu Simbel", which is why we review its history through the following lines.
The Great Temple of Abu Simbel, located in Nubia near the southern border of Egypt, was completely cut down by King Ramses II in the mountain, about 1264 BC, and the temple is famous for its four huge statues sitting that adorn its facade, one of which collapsed due to an ancient earthquake and its remains are still on the ground .

Colossal statues of the king stand on both sides of the main hall leading to the Holy of Holies, where four deities sit: Amun-Re, Re-Harakhty, Ptah, and deified Ramses II. The temple was built with high precision so that the sun's rays enter the temple two days a year, on February 22 and 22 October, crossing the main hall, and lighting up the statues in the depth of the temple, and it is believed that these dates correspond to the coronation and birth of Ramses II.

To the north, another rock-cut temple known as the Small Temple, is dedicated to the goddess Hathor and the great royal wife of Ramses II, Queen Nefertari.

In 1960, the entire complex of facilities was moved to another place, on an artificial hill made of the dome structure, and above the reservoir of the High Dam in Aswan. The Nile River.
An international campaign of donations began to save the temple, and the rescue operation began in 1964, and this operation cost 40 million dollars, between 1964 and 1968. New at an altitude of 65 m and 200 m higher than the river level. It is considered to many as one of the greatest works in archaeological engineering. Some structures were rescued from under the waters of Lake Nasser. The transfer process was completed and the temple was accepted into the list of World Heritage Sites "UNESCO" in 1979. .

It is noteworthy that the sites and museums that included raising the efficiency are: the temples of Edfu, Philae, Kom Ombo, Kalabsha, Isis, Abu Simbel, Amda, and Al Sebou, in addition to the Jebel Silasah area, Sohail Island, the missing obelisk, and the Crocodile and Nubia Museums, which were provided with all services. The necessary guiding and explanatory means commensurate with its nature and historical value, in addition to compatibility with the Aswan visual identity project, which is currently being implemented along the lines of what is being done in Luxor Governorate, in addition to developing visitor centers.
The project also included placing a number of guiding signs on the roads leading to these sites and museums, which were implemented in coordination with the governorate, and they were provided with maps that highlight the tourist and archaeological sites in Egypt in general and Aswan Governorate in particular. With panels implemented with the unified code, such as visit policy, appointments and ticket prices, as well as the hotline for complaints and suggestions (19546), and directions to facilitate visitors for ease of transfer within the archaeological site or the museum, as well as preparing the parking lots in Abu Simbel and Kom Ombo to receive visitor cars and tourist buses.