A journey that began 186 years ago ... The Egyptian Museum will not die after transporting the mummies 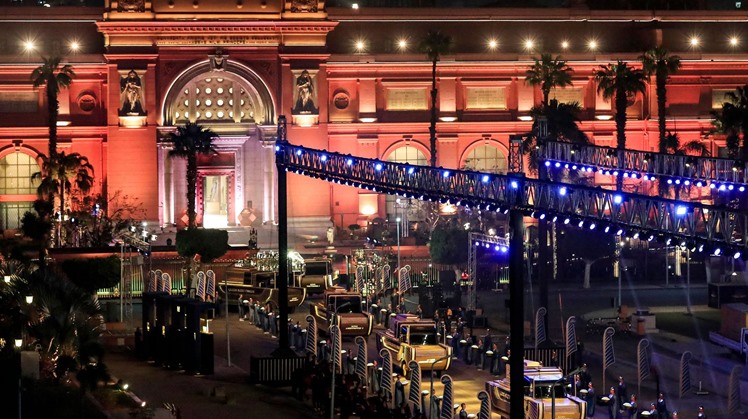 Tue, Apr. 6, 2021
The Egyptian Museum has dazzled the world with Tahrir since 1902, and work is now underway to develop it in cooperation with the European Union, so the museum will not die, this was within the words of Dr. Khaled Al-Anani, Minister of Tourism and Antiquities, during the global ceremony for the transfer of royal mummies from the Tahrir Museum to the permanent display place in the Museum Civilization, and for this we review through the next report the history of the Tahrir Museum.

The Egyptian Museum in Tahrir, in the heart of Cairo, includes the largest collection of antiquities of ancient Egypt, as it contains more than 136 thousand Pharaonic antiquities, in addition to hundreds of thousands of antiquities in its stores.

The story of the founding of the museum began with the great international interest in Egyptian antiquities after the decipherment of the Rosetta Stone by the French scientist Champollion, and the museum’s first nucleus was in a small house at the ancient pool of Azbakeya, where Muhammad Ali Pasha ordered the recording of fixed Egyptian antiquities and the transfer of valuable antiquities to the Azbakeya Museum in 1835. .

After the death of Muhammad Ali, the theft of antiquities returned again, and his successors followed the path of donations, and the museum’s holdings diminished. In 1858 AD, "Mariette" was appointed as the first officer to occupy the antiquities, meaning what currently corresponds to the head of the Antiquities Authority. He found that there must be an administration and a museum of antiquities. By choosing the Bulaq area to establish a museum of Egyptian antiquities and transferring to it the effects that were found during his excavations, "such as the effects of the tomb of Aahhotep."

In the year 1863 AD, Khedive Ismail approved the project to establish a museum of Egyptian antiquities, but the project was not implemented, but he was satisfied with giving Mariette a place in front of the Antikkhana House in Bulaq to expand his museum, but in 1878 AD there was a severe rise in the flood of the Nile, which caused the flooding of the Bulaq Museum and the loss of some of its contents, and the museum was reopened. In the year 1881 AD, in the same year, Mariette passed away and was succeeded by "Maspero" as director of antiquities and the museum.

In the year 1890 AD, when the collections of the Bulaq Museum increased, they were transferred to the Serail of Giza, and when the scientist "De Morgan" came as head of the department and the museum, he re-coordinated these collections in the new museum known as the Giza Museum, and in the period from 1897-1899 AD, Laurie came as the successor to Morgan. But Maspero returned again to run the department and the museum from 1899 - 1914 AD, and in 1902 AD he transferred the antiquities to the current building of the museum "in Tahrir Square" and one of his most active assistants in his second work period was the Egyptian scientist Ahmed Pasha Kamal, who was the first to specialize in antiquities Ancient Egyptian and worked for many years in the museum.

As for the first Egyptian director of the museum, Mahmoud Hamza, who was appointed in 1950 AD, the museum had a brief guide that Maspero made back to 1883 AD, but he made a large guide for the new museum that has been printed and repeated from 1915 until now.

On the architectural design of the museum, the current Egyptian Museum was designed by the French engineer Marcel Dorono in 1900, in a way that matches the ancient and classic monuments, but it does not compete with the ancient Egyptian architecture that still exists, as the museum contains spacious interior halls and the walls are high, and natural light enters through the glass panels On the ceiling and from the windows on the ground floor.

As for its holdings, the Egyptian Museum consists of two floors, the ground of which is devoted to heavy monuments, "such as stone sarcophagi, statues, paintings and wall inscriptions." As for the upper part, it is devoted to light artifacts such as "manuscripts, statues of gods, royal mummies, antiquities of daily life, pictures of mummies, incomplete sculptures, statues and utensils of the Greco-Roman period and antiquities." Especially the beliefs of other life, ”as well as complete collections such as“ Tutankhamun’s Collection ”. The museum also includes a huge number of Egyptian antiquities from prehistoric times until the end of the Pharaonic era, in addition to some Greek and Roman antiquities, including“ a group of pottery vessels (from ages Prehistoric), the Narmer salat (the era of monotheism), the statue of the Khasekhem (family 2), the statue of Djoser (family 3), the statues of Khufu, Khafre and Menkaure (family 4), the Kaabar statue and the statues of the servants (family 5), and the statue of the dwarf Seneb (family 6), the statue of Mentuhotep Nabbat-Ra (family 11), statues of Amenemhat I, II and III (family 12), the statue of the Ka of King Hor (family 13), statues of Hatshepsut and Tuthmosis III (family 18), and the group of Tutankhamun (family 18), And the k Noz Tanis, and a large collection of mummies from different eras.