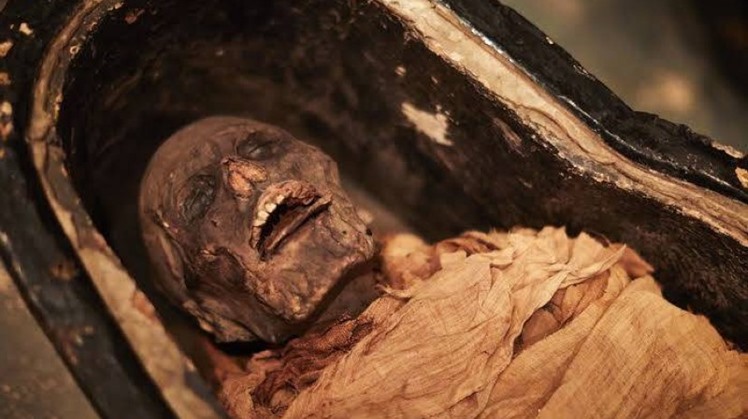 Sun, Feb. 28, 2021
A recent study at the German University of Copenhagen on a "papyrus" dating back 3,500 years ago gave a new look at Egyptian mummification techniques. The ancient medical text details a previously unidentified procedure and reveals a process of wrapping a dead face with wet bandages in an ointment to reduce Swelling, ancient-origins reported

It is known that the ancient Egyptians achieved great fame in the art of mummification, and they believed that the physical form was part of the human soul, so preserving the physical body was necessary to enjoy the afterlife.

However, despite the enormous scale with which the Egyptians embalmed their dead, the site says, the process and techniques used are still not fully understood.

Much of what we know about mummy making in ancient Egypt comes from accounts written by the Greek historian Herodotus in the fifth century B.C., who chronicled the steps taken by the ancient Egyptians in preparing and preserving corpses, where embalmed people would remove organs of the dead individual - including the brain, which will be Extracting it through the nose, after that, they sterilize the chest and abdominal cavity, before placing the body in a salty liquid containing a mixture of soda ash and sodium bicarbonate, and this would drain the body fluids and prevent the body from rotting, and finally, they wrapped the body in strips of linen and buried it. .

Based on evidence recently discovered in a 3,500-year-old medical papyrus translated by researchers from the University of Copenhagen, more details have been discovered about the complex embalming process used to prepare the dead for the afterlife, in particular, the face of the deceased person, and they believe it is the oldest surviving evidence of Mummification has been discovered so far, and it precedes the only other two examples of embalming texts by more than a thousand years.

The six-meter-long manuscript, called the Louvre-Carlsberg Papyrus, and dating back to about 1450 BC, contains instructions to remind the embalmer of the steps and processes he must take during the mummification process.

"The text is read as a memory aid, so the target readers must be specialists and they need to be reminded of these details, such as unclear prescriptions and the uses of different types of bandages," wrote Egyptologist Sophie Sheet, who translated the papyrus.

Sophie Sheet adds, "One of the exciting new information that the text provides us is related to the procedures for embalming the face of the deceased," where we get a list of medicinal ingredients consisting largely of plant aromatic materials and binders that are mixed, where the embalmers cover a piece of red linen, then the linen is placed Red on the face of the deceased in order to encapsulate him in a protective cocoon of an aromatic and anti-bacterial substance, and this process is repeated over a period of four days.

According to the University of Copenhagen, the importance of the Louvre and Carlsberg Papyrus lies in detailing the embalming process in an outline of the process that is divided into periods of four, with the embalmers actively working on the mummy every four days.

"These days were celebrated in a ritual procession of the mummy, to celebrate the progress made in restoring the physical integrity of the deceased, and there were 17 processions over the course of the mummification period," Chet said.