60 thousand bees help a Dutch artist in creating the statue of Nefertiti .. Pictures 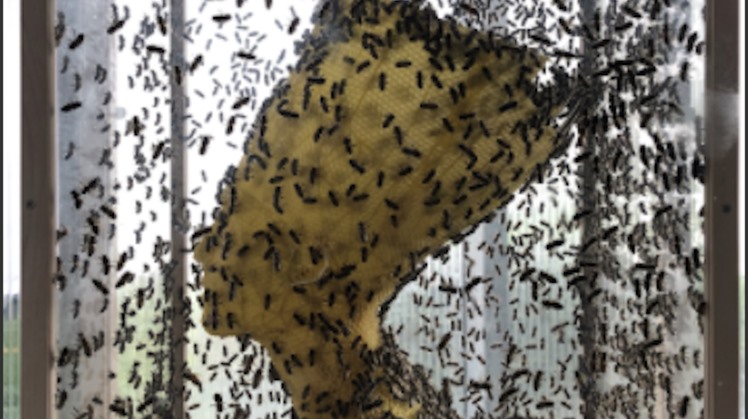 Mon, Jan. 25, 2021
Passion for the ancient Egyptian civilization pervades the whole world, and recently, a Dutch artist used 60,000 bees to recreate a bust of Nefertiti from beeswax and honeycombs.

My Modern Met says Nefertiti is one of the most famous figures in ancient Egypt, along with the pharaoh Akenaten, who witnessed an era of tumultuous religious unrest.

Dutch artist Tomás-Libertini spent two years building a "new queen," beginning with building a 3D model of the original bust before providing assistance from the 60,000 bees that brought the piece back to life.

The two-year process took place in several phases, as it was exhibited at Kunsthal in Rotterdam in the summer of 2019 as a live installation where visitors had the opportunity to observe the process of building bees for artwork in the museum, during this time, the colony of bees occupied the empty frame and added honeycomb and wax. Honey, slowly giving the statue shape.

The following year, the open-air bust was completed in Slovakia and exhibited as part of the Melancholia Solo exhibition Tomás Libertíné at the Rademakers Gallery in Amsterdam.

Tomash Libertini says natural beeswax is one of the most durable natural materials, and this statue will easily last for thousands of years if it is kept in a suitable environment. This duality or contradiction between fragility and persistence is what pleases me, as is the case with people, sometimes sensitive hearts are The hardest of them all, I think that's a very powerful message, especially when presented as one of the most iconic women in human history.