What are the last items transferred to the National Museum of Egyptian Civilization? 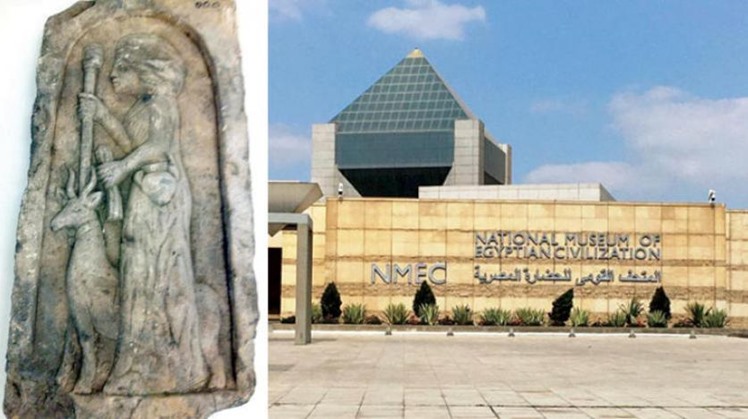 Wed, Nov. 25, 2020
The Ministry of Tourism and Antiquities is working during the current period to prepare and finalize the imminent opening of the two central exhibition halls and mummies in the National Museum of Egyptian Civilization in Fustat, as the museum is still receiving a number of artifacts from various archaeological sites and museums, which we will review during the next lines.

Q / What are the last pieces received by the Museum of Civilization?
A / The museum received a double statue of King Merenptah, the son of King Ramses II and the fourth king of the Nineteenth Dynasty, and the goddess Hathor, coming from the Mit Rahina area, to be displayed within the scenario of the museum display of the central hall.

Q / What is the description of the newly transferred statue?
A / This statue is one of the largest statues of King Merenptah found, with a height of about 2.60 meters, a width of one meter, a depth of 0.75 meters and a weight of more than four tons, and it depicts King Merenptah holding the hand of the goddess Hathor, who is standing to his left, while they are wearing Double crown. The statue is decorated with hieroglyphic inscriptions on all four sides of the titles of King and Hathor.

Q / From what material was Merneptah made statue?
A / The statue was carved from the pink granite stone that was cut from the Aswan quarries.

Q / Will the mummy of King Merenptah be transferred among the royal mummies?
A / Indeed, the mummy of King Merenptah will be received within the royal mummy, which will be transported in a majestic procession and a large popular and international celebration from the Egyptian Museum of Tahrir to the National Museum of Egyptian Civilization in Fustat to be displayed in the Royal Mummies Hall, as a permanent display.

Q / What does the National Museum include?
A / The museum is all manifestations of the richness and diversity of the Egyptian civilization from prehistoric times to the present day, and this is due to the diverse archaeological and heritage collections that the museum includes, as well as highlighting aspects of the Egyptian material and intangible heritage through narrating societal and living life, arts and traditional crafts in Egyptian civilization.
More about this source textSource text required for additional translation information