Things You Will Only See At The Grand Egyptian Museum 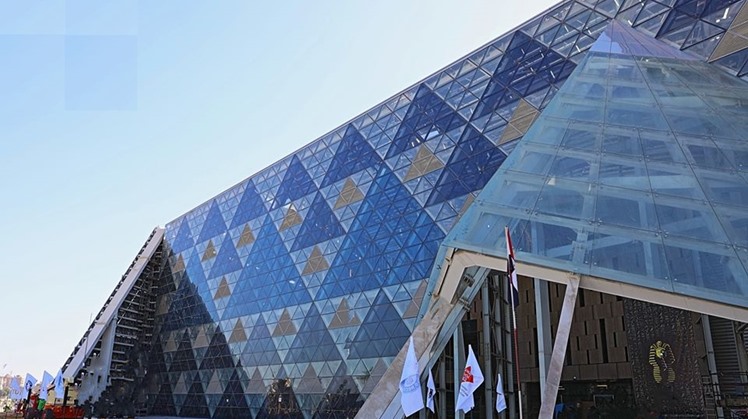 Sun, Oct. 18, 2020
The Grand Egyptian Museum is one of the largest global museums and the largest of one civilization, which the whole world is waiting for its opening, due to the artifacts it contains, which number more than 50 thousand artifacts, including the holdings of King Tutankhamun, which is presented for the first time in history to the public completely, so the project is the focus of The interest of the Egyptian government, which removes any obstacles that may affect its completion, and the world will see at its inauguration things that it cannot find except in this great cultural edifice.

Before entering the museum, we find a place where the hanging obelisk will be placed, where the visitor will be able to step on this glass surface, and see the original base, and as soon as he meets an eye, he sees the cartouches of King Ramses, below the obelisk, the structural structure has been completed by 100% and the finishes that have reached about 80% remains only to cladding the columns, and although this work is simple but complex engineering, because the obelisk must be preserved from any vibrations that emanate from the subway after completing its work, or from the vibration of cars in the vicinity of the museum, so a very precise protection system was made for the obelisk body from vibrations, In a few weeks, we will construct the obelisk in its final form.

After passing through the obelisk, you will find the facade of the Grand Egyptian Museum, which was designed with Egyptian materials, where about 180 million dollars of the total original measurement of the facade was provided, where the estimated value was more than 200 million dollars and could reach 250 million, meaning that it was done in the sense of Its cost is at 10% of the estimated value that was allocated to it before, and the implementation rate has now exceeded 98% for facade works, and during the current month, 100% of the facade works will be fully completed.

The visitor passes from the facade to find Ramses the Second, who stands tall in the lobby of the Grand Egyptian Museum, which exceeds 2 acres, with an area of ​​8000 meters, and the height of the ceiling reaches 35 meters, and to this vast area, artifacts have been added to enrich the lobby, including the Merneptah Column and the two royal statues The two were installed about two months ago, and the facade of Ramses was changed from the east to the southeast direction, and we will continue where there are 10 to 12 pieces present in the lobby, so we find the obelisk square receives visitors to receive it to King Ramses, then the rest of the kings are delivered to the great staircase.

The statue of Ramses Ramses II and the pieces that accompanied it will deliver you to the Great Hall, which will contain about 72 artifacts, of the most important and largest Egyptian monuments to the kings of Egypt, which amount to hundreds of tons, where 55 pieces have been installed, and their bases are being finished.

Then the visitor takes his way to visit the halls dedicated to the exhibition, which includes the complete collection of the golden king Tutankhamun, where the visitor will see the whole pieces that are shown for the first time completely, which have been transferred to the restoration laboratories of the Grand Egyptian Museum, leaving only a few, including a mask Tutankhamun, the chapels, which will be moved near the opening of the grand museum.

As for the construction work in the museum, the total construction work that took place in the museum has reached about 97%, and the remaining works are from 3 to 4%, covered by more than 80 companies and consultants, currently present, between Egyptian and Egyptian foreign and foreign companies exclusively, from Between 46 and 50 countries are working within the Grand Egyptian Museum project, in the remaining works, and in my opinion there is no country in the world that did not contribute to the project, whether with labor, engineers or raw materials.