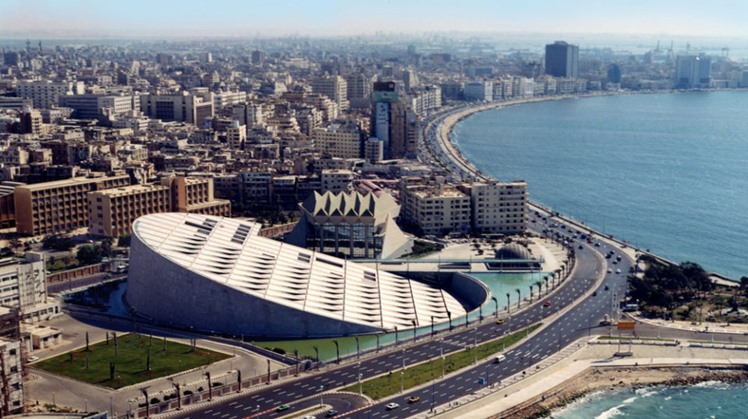 Tue, Feb. 18, 2020
The Arts Center of the Communication Sector of the Bibliotheca Alexandrina continues to organize and host many artistic activities during the month of February, where at 7 pm today, it will present a cinematic film "When You Speak Memory" in cooperation with the Goethe Institute, the film was produced by West Germany Argentina in 1989, and it is a German speaker and translator to English.

The Center will present from February 17 to 19 a theatrical performance under the title "Food for Every Mouth" within the presentations of the Library of Alexandria Scholarship for Theatrical Performances, the show, written by Tawfiq Al-Hakim and directed by Tarek Nader. As for Thursday, February 20, the music concert by artist Royce Aziz will be held at 7 pm at the small theater.

And on Friday, February 21st, there will be a concert by the "Nubiat" team, which presents many songs of the Nubian heritage, in the Great Hall. The concert by Musad Ozil will be performed on Saturday February 22nd in the small theater. On Sunday 23 February, the center will perform a dance show in cooperation with the "Resoudance Egypt" Center in the Great Hall.

Cinema Sunday continues to present its shows for this month under the title of four documentaries of Jenin Mirabel with the movie "Mosconi" produced in 2007, which is Spanish-speaking and translated into English.

The month will end on Saturday, February 29th, with a theatrical performance titled "Legend of the Knight and the Hero", authored by Sameh Othman, directed by Sameh Al-Hadary, at the Great Hall.


On the other hand, the Center for Alexandria Studies and the Mediterranean Civilization, affiliated with the Academic Research Sector at the Library of Alexandria, is organizing a symposium titled "Documenting the decoration of heritage buildings and modern trends in the design industry" in cooperation with the Egyptian Foundation for the Protection of Heritage.

The seminar begins with a presentation by the work of the Center for Alexandria Studies and Civilization of the Mediterranean, which will explain its various projects related to Alexandria, whether in preserving its cultural heritage or by helping to develop plans for its sustainable development.

The symposium will also host the Egyptian Foundation for Heritage Rescue who has worked successfully on the architectural documentation project for the Mamluks in Cairo funded by the Cultural Protection Fund of the British Council, thus providing the center with an opportunity for the Alexandrian cultural community to have a permanent view of what is happening today at the cultural level in Cairo. These intellectual initiatives have inspired international designers such as Egyptian designer of jewelry, Azza Fahmy, who is the guest of honor of the symposium, which talks about her recent Mamluk collection inspired by the project.

It is worth noting that the Alexandria Studies Center and the Mediterranean civilization are concerned with Alexandria and its relationship to the Mediterranean basin. The studies conducted at the center aim to shed light on the valuable cultural heritage of the city in an attempt to enhance the sense of identity and belonging, and highlight the material heritage and make it accessible to the public at the local and regional levels.

The Center is keen on continuous cooperation with its partners throughout the country regarding the study of heritage and how it can be sustained. This event is the first of a long series of cooperation initiatives in 2020 between the center and its cultural partners.