Displaying personal portraits of mummies in Egypt during the Roman era, instead of the 22 mummies transferred to the Museum of Civilization in Al-Fustat. 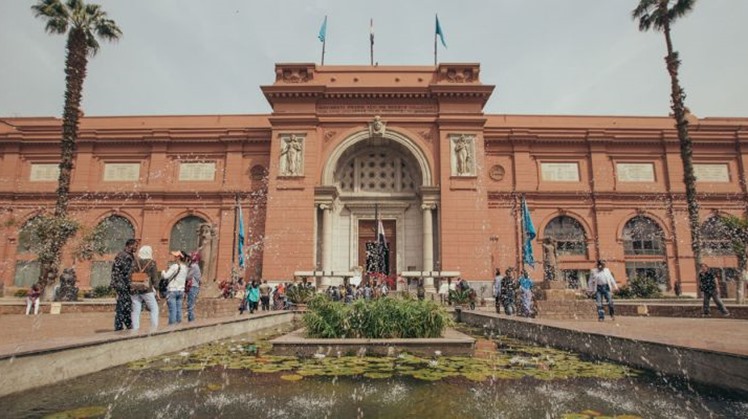 Sun, Jan. 12, 2020
In light of the preparations of the Ministry of Tourism and Antiquities to transfer 22 royal mummies from the current place of display at the Tahrir Museum to the place of permanent display in the National Museum of Egyptian Civilization in Al-Fustat, during the next few period, as it is being prepared for transportation in a global procession befitting the ancient Egyptian civilization, and the number of mummies to be transferred is 22 Mummy and 17 royal coffins, but the question here is what is being displayed in the mummies hall of the Editorial Museum? To find out the answer, we contacted Sabah Abdel Razzaq, the director general of the Egyptian Museum, in Tahrir.

Sabah Abdel-Razek said that after the transfer of the 22 royal mummies from the museum's mummy hall, other mummies will not be displayed instead, but a scenario for a new display scenario will be developed inside the hall, and artifacts will be displayed in front of the public, after the transfer of the mummies will not be left Which are prepared and work necessary equipment to preserve them.

Regarding what is displayed in the hall instead of the transported mummies, the Director General of the Egyptian Museum explained with editing that the artifacts to be displayed in the hall after the transport work is carried out in a major ceremonial, are Fayoum portraits, a group of personal paintings that were painted on wood, and were affixed to the mummies In Egypt, the era of the Romans, where the mask of the dead was replaced by those personal portraits, and it was found in Fayoum Governorate in Egypt, although it was also found in other locations extending from Saqqara in the north to Aswan in the south, and the portraits embody authentic Egyptian features and faces.

Equipment for the transport of mummies is prepared, and therefore the Ministry of Tourism and Antiquities is considered an ancient Egyptian costume, worn by individuals accompanying the procession. War wheels similar to the old Egyptian war wheels were manufactured, along with playing musical pieces, in addition to unifying the color of building paints located on the highway of transporting the mummies, so that The exit of the event in front of the worker in a world class fashion, befitting the history of ancient Egyptian civilization.

The Ministry of Tourism and Antiquities is also working to transmit the event through a large group of local and international media, to send a message to the whole world, that Egypt is a great civilized history, and that the event is not limited to being only for transporting mummies, but it carries many goals, which are scenes The world Egypt and its clean streets, and the formation of the new Tahrir Square after the installation of sculptures of rams, and the obelisk removed from the maintenance of stone.

The number of mummies and coffins to be transported is 22 royal mummies and 17 royal coffins, dating back to the era of captivity 17, 18, 19, and 20, including 18 mummies of kings and 4 mummies of queens, among them the mummy of King Ramses II, King Sakan Ra, and King Thutmose III, and King City The first, Queen Hatshepsut, and Queen Mert Amon, wife of King Amenhotep I, and Queen Ahmose Nefertari, wife of King Ahmose.

Royal mummies will be transferred to the National Museum of Civilization in a large march, in preparation for the opening of 3 halls that include the central exhibition hall that is scheduled to include a variety of artifacts, which are displayed inside the various museum halls, mummies hall, and the Capital Museum, which includes the latest types of multimedia and screens Interactive, and completion of them within 3 months.

It is worth noting that the second coordination meeting was held to discuss the procedures for transferring royal mummies and coffins from the current place of display in the Egyptian Museum in liberation to the place of permanent display in the National Museum of Egyptian Civilization in Fustat, during the month of August, at the headquarters of the Museum of Civilization, during the past month, and in the presence of representatives from the ministries of defense , Interior, Tourism, Cairo Governorate, Security Agencies, and the Supreme Council of Antiquities.

During the meeting, many topics related to the mummy transport line were discussed, raising the efficiency of roads from the Liberation Museum to the Museum of Civilization, in addition to the exit and entry places for the vehicles that will carry out the transfer, in addition to discussing the organization of the procession line inside the Museum of Civilization after arrival.