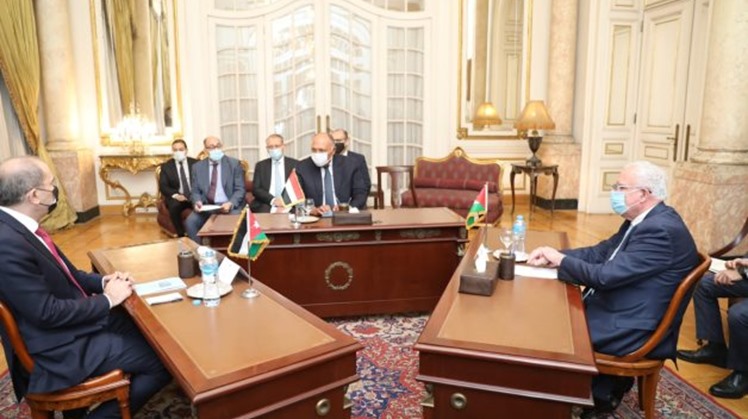 Shoukry’s comments were stated during a tripartite meeting with his Jordanian and Palestinian counterparts Ayman Safadi and Riyad Al-Maliki at the Tahrir Palace, downtown Cairo, and ahead of the 156th ordinary session of the Council of the League of Arab States at the ministerial level on Thursday.

“The meeting aimed to discuss the latest developments in the Palestinian cause and the efforts made during the past period to work on re-engagement in the peace process and launch a serious and constructive negotiating process for reaching a comprehensive and just settlement on the basis of the two-state solution that guarantees the establishment of an independent Palestinian state on the borders of June 4, 1967, with East Jerusalem as its capital,” said Hafez in the statement.

Shoukry called upon the international concerned parties to provide appropriate conditions to push forward the peace path during the coming period, in a manner that achieves the desired peace and stability in the region, Hafez said.

Both Jordanian and Palestinian Ministers praised Egypt's initiative to rebuild Gaza and provide development support to the Palestinian territories, as well as for its continuous efforts to achieve the desired Palestinian reconciliation, Hafez continued.

They also agreed to continue holding the tripartite consultation to achieve the interests of the three countries and their peoples.

On the same day, Shoukry held a bilateral session of talks with Safadi at Tahrir Palace, discussing regional developments in light of the consensus of visions between Cairo and Amman regarding them.