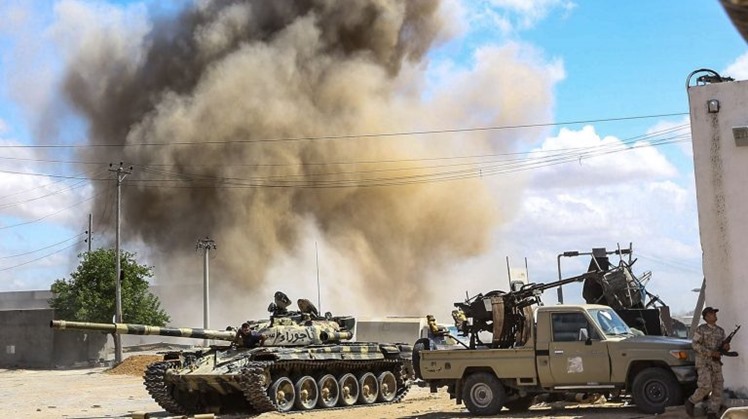 Wed, Oct. 7, 2020
CAIRO – 7 October 2020: Head of the Egyptian General Intelligence Service (GIS) Abbas Kamel on Monday met with the US ambassadors to Libya and Cairo, to discuss latest developments of the Libyan crisis.

They also discussed the ongoing Egyptian efforts towards solving the Libyan crisis, the most recent of which was the Hurghada meetings that took place at the end of last month under the auspices of the United Nations.

Separately, Egyptian Foreign Minister Sameh Shoukry has called for maintaining ceasefire in Libya, dismantling and disarming militias, as part of recommendations of the 2020 Berlin Conference on Libya, the ministry said in a statement Monday.

In a virtual ministerial meeting co-hosted by the United Nations and Germany to back peace efforts in Libya, Shoukry called for sticking to Berlin conference outcome, including the need to combat terrorist groups, immediately halt the transfer of “terrorists” from Syria and remove foreign troops from Libya.

Shoukry said that such commitments have been promised by the international community and Libyan parties, but have not been applied on the ground and have not been faced with deterrent measures.

Concerning Egypt’s role, Shoukry said he hopes that Egypt does not reach the state of being forced to defend its national security in the way it views as necessary, according to the President’s remarks in Sidi Barani base in Matrouh Governorate bordering Libya.

As he inspected forces in the Western Military Zone in June, President Abdel Fattah El Sisi said "any direct intervention by Egypt in Libya has become legitimate in line with UNSC resolutions, and upon the call of the legitimate authority in Libya."

Shoukry, in his Monday speech, said Egypt continues its efforts to achieve security and stability in Libya through communication with Libyan parties, in full coordination with the United Nations and the International Community.

“Today, we are in front of an ideal opportunity to reach a political settlement that takes into consideration all political, security, economic and social aspects of the Libyan crisis,” Shoukry said.

A settlement will also take into account “the fair distribution of power and wealth, end any foreign interventions and eliminate the presence of terrorists, mercenaries and foreign troops on the Libyan land,” he added.

“It is necessary that our meeting today sends a clear and unambiguous message that the international community is serious about ending the Libyan crisis, according to the will and vision of Libyans”.

“It is also not in the Libyan parties’ interests that the conflict extends for a longer time so that their suffering continues as well as the depletion of their wealth, which shall be directed for the construction of Libya and for the benefit of its people