In a phone call: Egypt's Sisi, US Biden discuss developments in Palestine, GERD and Libya 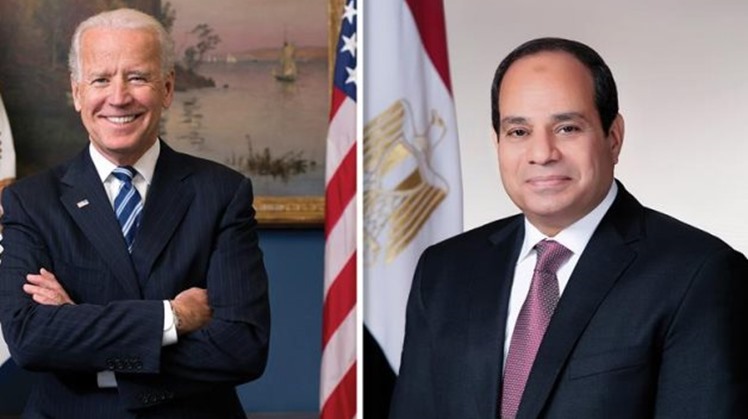 Tue, May. 25, 2021
CAIRO, 25 May 2021: Egypt’s President Abdel-Fattah El-Sisi discussed on Monday the latest developments in the Palestinian territories, the Grand Ethiopian Renaissance Dam (GERD), and Libya in a telephone call with US President Joe Biden, the Egyptian presidency said.

According to the Egyptian presidency, Biden and El-Sisi discussed the latest developments in the Palestinian territories and ways to revive the peace process after the recent developments, as well as stabilising the ceasefire between Israel and Palestinian factions, which was brokered by Egypt with US support, according to Ahram Online.

The two presidents also discussed the international effort to reconstruct Gaza and the humanitarian aid it needs.

President Biden said his country is ready to coordinate efforts with all international partners to support the Palestinian Authority and reconstruct Gaza.

Biden also expressed his appreciation for the Egyptian efforts in securing the ceasefire, adding that he is looking forward to continuing coordinating and consultation on this matter.

The Egyptian president also spoke about the latest developments concerning the GERD, where he welcomed the continuing US efforts in this issue.

El-Sisi affirmed Egypt’s stance on protecting its water rights through reaching a fair and binding legal agreement between Egypt, Ethiopia and Sudan that includes clear terms and rules for the filling and operation of the GERD.

President Biden said that Washington completely understands the extreme importance of such an issue to the Egyptian people, indicating that more efforts will be exerted to ensure the water security of Egypt.

The two presidents agreed to boost diplomatic efforts in the upcoming period to reach an agreement that protects the water and development rights of all parties.

They also discussed the latest situation in Libya and the importance of restoring the stability of the Libyan state and its institutions as well as the upcoming elections by the end of the year.

The US president praised the Egyptian efforts in Libya which support the political process. Biden and El-Sisi also spoke about Iraq and the latest developments there.

The two leaders also discussed bilateral relations between the United States and Egypt and ways to boost those relations.

They also discussed the issue of human rights, with the two leaders agreeing that the US and Egypt will be committed to joining a transparent dialogue concerning human rights.

President Biden said his administration looks forward to boosting bilateral relations in all fields, especially given Egypt’s pivotal role regionally and internationally and its role in supporting security and stability in the Middle East.

This is the second call between El-Sisi and Biden in a less than a week. The first was on Thursday following the announcement of the ceasefire between Israel and the Palestinian factions in Gaza, which Egypt brokered.

Following the telephone call, President El-Sisi issued a small statement on his social media account, where he said their conversation “was characterized by understanding, honesty and transparency in all the issues that concern the two countries and the region.”

The Egyptian president also said that “President Biden has an insightful vision and distinguished experience characterised by realism regarding all files, including the file of bilateral relations.”

El-Sisi added that Biden, with his sophistication and experience, is able to find radical solutions to all problems and challenges around the world and in the region.