Egypt's FM says ties with US 'close, strategic' over 4 decades 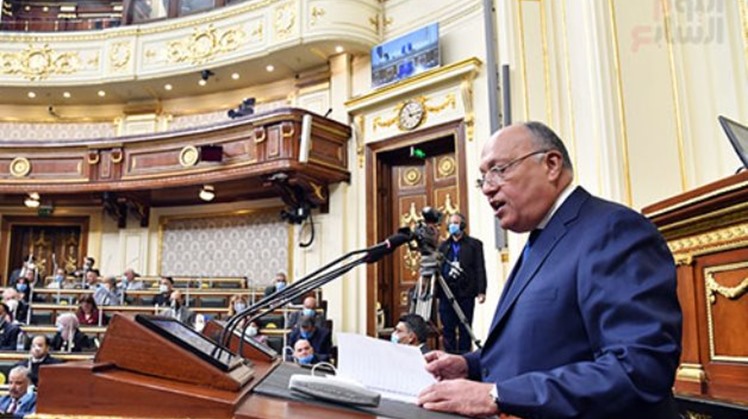 As a major power, the United States has massive political and economic capabilities, Shoukry said. "It is very essential to explore common interests through the close relations."

Permanent contacts were made through diplomatic missions in Cairo and Washington, senior officials, and ministers, he added.

Despite their different visions, Cairo has made in-depth dialogues with both Republican and Democrat administrations for 40 years, the top diplomat said.

"We have points of agreement, as well as points of difference. But our different visions have never meant any kind of divergence," he added.

Currently, communications are in place via the Egyptian Embassy in Washington with officials from the US State Department and the National Security Council in the White House to lay down future mechanisms for managing relations and clarifying the Egyptian vision on regional issues of common concern, Shoukry said.

The new US administration has not clarified its positions on many regional issues. So, Egypt needs to explore the situation before judging the path, he added.

"We have no room for concern or optimism," the minister said. "It is about how to manage relations naturally".

On the Eastern Mediterranean partnership file, Shoukry described the Egyptian-Greek-Cypriot cooperation as a "main core" that could be expanded to include Gulf states sharing close ties and common interests in maintaining the Arab national security, as well as a joint vision on cooperation issues and regional challenges.

"Egypt was shocked by Turkish remarks against such cooperation framework as its sole goal is to achieve common benefits of the peoples of those countries without targeting any specific side," he added.

Regarding the Egyptian-Qatari reconciliation, Shoukry said Egypt has always respected its commitments, including Al Ula declaration in Saudi Arabia.

"We sought to hold bilateral committees to negotiate on specific steps needed to put Al Ula commitments into force," the minister said. "These meetings will review all the existing commitments of both sides."

On Libya, Shouky said the position declared by President Abdel Fattah El Sisi that set Sirte-Juffra axis as a "red line" was the kick-off point that opened the door to reach a political settlement in the Arab country.

"The Egyptian state has been involved in helping the Libyan brothers reach this political path," he added.

"We hope that the formation of the Libyan government will be completed within the specified timeframe and that the government will realize its responsibility to serve the Libyan people, achieve stability, protect the state’s sovereignty and capabilities, expel all foreign forces from the country, end the dangers of terrorism and militias, and certainly fulfil its commitment to staging the elections on December 24," he added.

"We also expect full respect for the Egyptian national security by preventing any threat from the Libyan territory towards the Egyptian western borders," the top diplomat stressed.

On the Palestinian cause, Shoukry said all sides, including the new US administration, consider the two-state solution as the realistic settlement to end the conflict, achieve the legitimate rights of the Palestinians and establish their state.