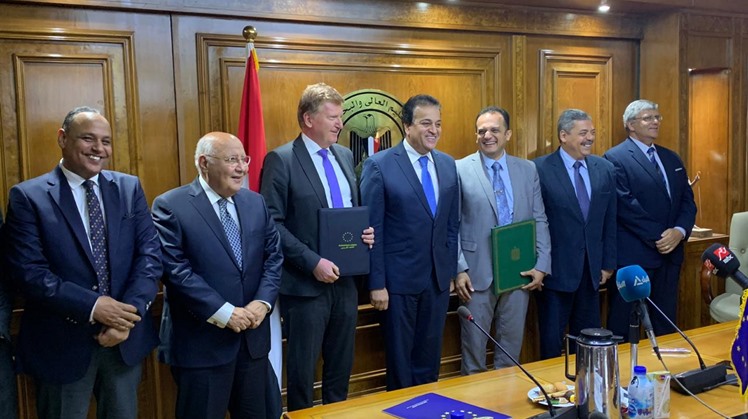 Wed, Sep. 18, 2019
CAIRO - 18 September 2019: Egypt and the European Commission (EC) signed on Wednesday an Implementing Arrangement for mutual assistance under Article 2 of the ‘Agreement for scientific and technological cooperation between the European Union and the Arab Republic of Egypt setting out the terms and conditions for the participation of the Arab Republic of Egypt in the Partnership for Research and Innovation in the Mediterranean Area (PRIMA)’.

The agreement signed will support the scientific research and innovation in the areas of sustainable management of water and food systems in the Mediterranean countries by pooling know-how and financial resources in a strategic research partnership between the EU and participating states, including Egypt, according to the press release.

The agreement was signed by Ambassador Ivan Surkoš, Head of EU Delegation to Egypt on the European Union side and Dr. Mohamed Shinawi, Advisor to the Minister for International Relations and International Agreements, Ministry of Scientific Research on the Egyptian side.

The official ceremony took place at the Ministry of Scientific Research in the presence of Egypt's Minister of Higher Education and Scientific Research, Khaled Abdel-Ghaffar.
PRIMA is jointly funded by the EU (EUR 220 million), with the rest of the budget coming from the 19 Participating States empathizing the notion of co-ownership and co-funding.
In his opening remarks Ambassador Surkoš indicated that "I am especially pleased to see that Egypt is now fully integrated in the PRIMA family. This is the largest Research and Innovation initiative in the history of Mediterranean. The goal of this initiative, which is to build stronger scientific exchanges and knowledge flows across the Mediterranean shores in two critical areas: agro-food chains and sustainable water management.

Ambassador Surkoš also highlighted that "PRIMA is a materialization, not the only one - but certainly an important one, of shared vision between the EU and Egypt. This partnership has already become a key building block in the EU-Egypt relationship".

It is also worth mentioning that Egypt itself contributes EUR 30 million to the initiative and is taking part in the management of the initiative as co-Chair of the PRIMA Foundation.

The projects selected for funding under PRIMA address important sectors and contribute to linking research and innovation to socio-economic development. For example in the area of farming systems, a project will develop a Sustainable Mixed Cropping-Beekeeping System in the Mediterranean; and another project in the area of Agro-Food Chains will address innovation actions in the dairy industry operated by SMEs in Mediterranean region. Each project has a budget of around EUR 2 million