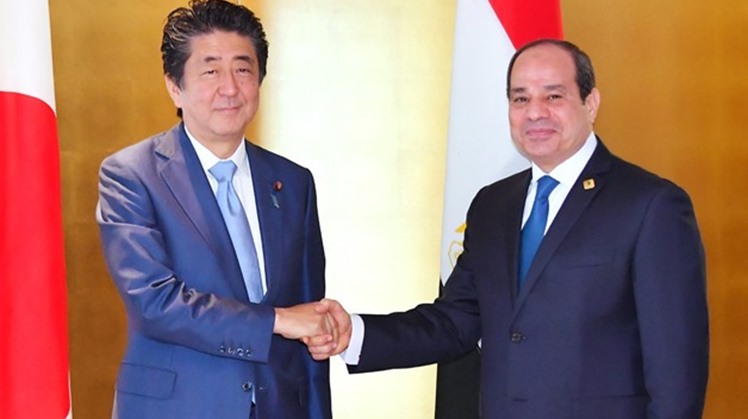 Presidential spokesman Bassam Rady said that at the beginning of the meeting Abe welcomed Sisi’s current visit to Japan, thanking the president for accepting his invitation to co-chair with him (TICAD-VII) which is the newest edition of the TICAD process that was launched in 1993 by the Government of Japan, to promote Africa’s development, peace and security, through the strengthening of relations in multilateral cooperation and partnership, particularly with the Japanese nation.

The premier voiced deep appreciation of the ancient Egyptian civilization which is greatly admired by his people, praising the achievements Egypt has accomplished so far in its development process and the tangible progress it has made in its economic reform program as well as the mega national projects it has recently been implementing, noting that the current positive changes in Egypt have significantly contributed to attracting more Japanese investments to its market, the spokesman said.

He pointed out that Abe also asserted that Japan attaches special importance to its relationship with Egypt, especially at the economic and political levels, applauding the pivotal role which Cairo plays in the region and most particularly in the Middle East area.

According to the spokesman, for his part President Sisi voiced appreciation of the warm hospitality accorded to him and his accompanying delegation, expressing his keenness to come to Yokohama to co-chair the TICAD VII with Premier Abe within the framework of efforts to bolster the strategic relationship between Egypt and Japan and contribute to the facilitation and promotion of high-level policy dialogue between Africa and Japan on issues pertaining to the continent’s comprehensive development to fulfill the aspirations of African peoples to enjoy stability and prosperity.

Rady said that the expanded Egyptian-Japanese session of talks took up Egypt’s effective contribution to efforts to serve Africa through its current chairmanship of the African Union and Tokyo’s keenness on working closely with the African countries to help them fulfill the goals of the UN 2030 Sustainable Development Agenda and the African Union Agenda 2063 for inclusive and sustainable development in the continent.

The two sides discussed joint cooperation to serve this purpose, the spokesman also said, adding that they reviewed as well a number of bilateral files pertaining to the progress which Egyptian-Japanese relations are witnessing and cooperation between the two countries in the fields of basic education, higher education, culture, technology, energy and transport, in addition to the implementation of the project to build the Grand Egyptian Museum as well as encouraging more Japanese companies to invest in Egypt.

Discussions also covered a number of regional files of mutual concern and Japan’s support to Egypt’s efforts to fight terrorism and extremist thought in the Middle East region, the need to reach political settlements for regional crises and the importance of continuing coordination between both countries at all levels and during international gatherings, Rady added.

TICAD7 is held in Yokohama, Japan from August 28 to 30. It is the third time for Yokohama to host this biggest international event happening in Japan.

The forum will be attended by 1,500 Japanese businessmen, and 50 Egyptian businessmen. More than 4,500 (based on attendance of TICADV) heads of state and government, as well as representatives of international and regional organizations, civil societies, NGOs and the private sector will participate in the summit.

The agenda of the three-day forum includes several plenary sessions in the morning and the afternoon, in addition to around 170 various sideline sessions