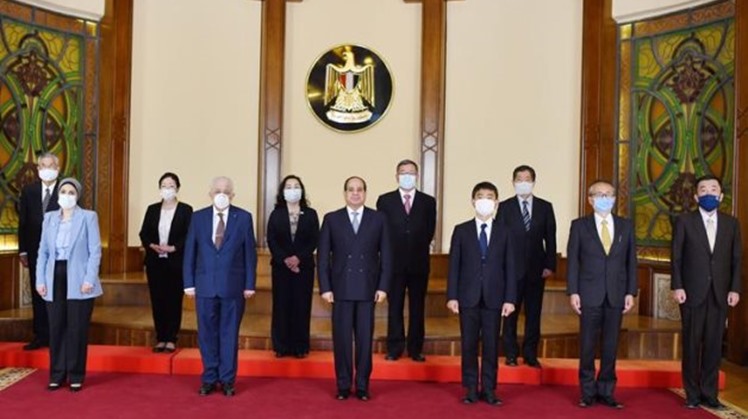 Wed, Apr. 28, 2021
CAIRO - 28 April 2020: Egypt's President Abdel Fattah El-Sisi on Tuesday held a meeting with a group of Japanese experts in charge of supervising the Egypt-Japan schools system in Egypt.

Minister of Education Tarek Shawky and the supervisor of the Egyptian-Japanese Schools Unit Neveen Farouk attended the meeting, a presidential statement read.

This comes in coordination with the Ministry of Education.

During the meeting, Sisi hailed “the great effort exerted by the Japanese experts in this vital national project that comes within the framework of the state’s strategy to build the Egyptian character since the early stages,” the statement read.

“This is done by following a comprehensive education system that balances between the focus on the academic aspect and the development of individual abilities to think and innovate,” the statement added.

The Japanese experts stressed their keenness to consolidate the foundations of the Japanese education system in Egypt, including training teachers and developing educational curricula in coordination with the Ministry of Education.

The Japanese experts also commended the seriousness of the Egyptian state to develop the education system in accordance with the highest standards.

Shawky presented the outcome of the missions of the Egyptian teachers who were sent to Japan to be trained on the Japanese education system, "Tokkatsu”.

He said 120 trainees, teachers and principals have been sent from the Egyptian-Japanese schools so far, noting that missions will be resumed after the coronavirus pandemic rate declines.