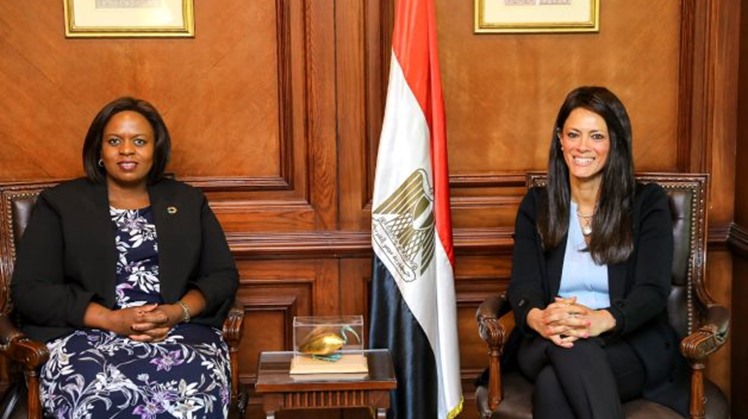 The UNCG is a non-binding United Nations pact to encourage businesses and firms worldwide to adopt sustainable and socially responsible policies, and to report on their implementation.

Mashat and Ojaimbo also discussed cooperation and coordination within the framework of Egypt’s hosting of the UN Climate Change Conference (COP27) scheduled for November in Sharm El-Sheikh city, the ministry said in a statement on Sunday.

Mashat affirmed Egypt’s keenness to enhance cooperation with all parties to push forward the global commitments regarding climate action.

For her part, Ojiambo affirmed keenness to enhance cooperation with Egypt within the framework of the COP27 given its importance on the regional and international levels.

During the meeting, Mashat also shed light on Egypt’s “Noufi” program that was launched to enhance partnerships between government, development partners, and the private sector to support climate action in the fields of energy, food, and water.

Mashat noted during the meeting that Egypt has made a climate adaptation project list to finance green projects in the energy, food and water domains as part of the National Strategy for Climate Change 2050.

The projects are launched under the umbrella of “Nouwfi” program for financing and investing in climate projects in the water, food and energy sectors, she noted.

The minister added that the program aims at accelerating efforts to convert to green economy, set up more flexible and lasting economic models, enhance climate financing and give more than one chance for partnership with private sector in carrying out eco-friendly projects.

In light of Egypt's hosting of COP27 in November, Shoukry referred to Egypt’s keenness to put the African climate change concerns at the forefront of the topics the session will address.

Shoukry said that the African continent is the most affected party by the negative repercussions of climate change, despite it being the least contributor to emissions.

He noted in the same regard the difficulties the African countries still face in obtaining the climate finance needed to address these repercussions.

Shoukry also highlighted the country's keenness to achieve consensus among the various international climate action stakeholders, especially with regard to the issues of adapting to climate change, mitigating its negative repercussions, addressing losses and damages, and providing climate finance.

Shoukry emphasized that the upcoming Egyptian presidency of the COP attaches great importance to the issue of implementing climate pledges and transforming them into a concrete reality.