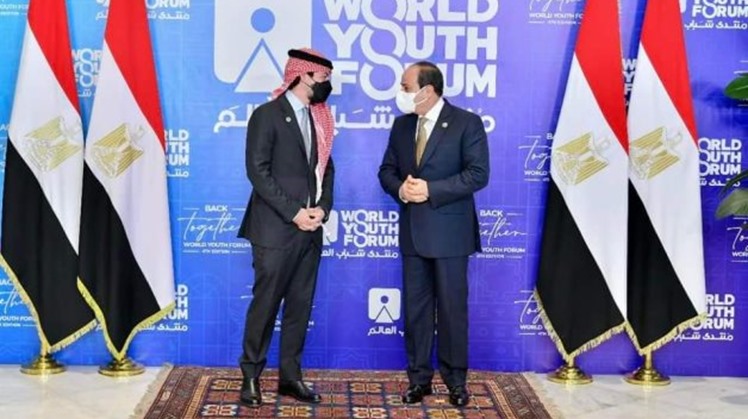 In statements, the crown prince described the forum as "important" as it brings together youth, decision-makers and intellectuals with a view to exchanging visions and ideas on many issues and topics of importance.

On his official Instagram account, Prince Al Hussein published a photo op of him along with President Sisi during the opening of the 4th edition of the World Youth Forum, which is held in the Red Sea resort city of Sharm el Sheikh on January 10-13.

The forum is held under the slogan of ‘Back Together’, with the participation of young people from 196 countries in Sharm El-Sheikh. WYF activities are expected to take place until January 13.

2021’s WYF agenda includes number of vital topics, which reflect the features of the new reality after Coronavirus pandemic, that affected the lives of millions all over the world.

Participants at the 4th edition of WYF have the choice to participate either physically or remotely via the virtual system due to COVID-19.

Several presidents and key figures have delivered speeches in person or virtually during today’s sessions, which have been attended by Sisi.

Speaking during the WYF, Sisi said that Egypt was one of the few countries around the word that achieved a growth rate amidst the Coronavirus pandemic.

Sisi noted that both of the tourism and aviation sectors in Egypt have been greatly affected by COVID-19; however, the government took steps to compensate the affected sectors.